featured3449
Mrs. Mary Scott celebrated her birthday today. It was a long time coming – 99 years and 21 days. The party was hosted at... 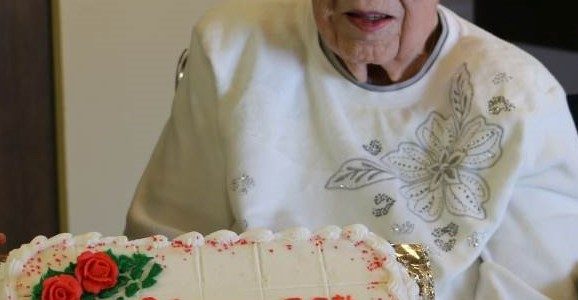 Mrs. Mary Scott celebrated her birthday today. It was a long time coming – 99 years and 21 days. The party was hosted at Parkview United Methodist Church, where she has been a longtime member. It was the fourth attempt to celebrate the special day of the spry lady who taught grade school in the Milbank area for 45 years – most of them in kindergarten at Koch School.

Mrs. Scott’s birthday is January 19, but sub-zero temperatures and icy roads put a damper on things this year. Her party was postponed until January 26.

On January 26, St. William’s Care Center, where Mrs. Scott now resides, was quarantined due to an outbreak of upper respiratory illness. Her party was postponed again until February 2.

Mrs. Scott didn’t catch the virus, but said, “The quarantine was so boring. All day, I just had to sit in my room. For six days, I had no visitors and I didn’t even have a good book.”

February 2 finally rolled around and out came the Groundhog. He didn’t see his shadow and he didn’t see Mrs. Scott either. She was suffering from a cold and couldn’t go out. Her party was put on hold one more time.

Today, February 9, the weatherman predicted five to 10 inches of snow with gusty winds, but, that party-pooper of a storm went another direction and dropped only two inches of snow on Milbank. The wind also remained calm. Finally, it was time to light some candles.

Mrs. Scott said she didn’t mind the delay as there was a bright spot during her wait, “I’ve received at least one card in the mail every day since my birthday. So, it has been a long celebration. Then she said with a sparkle in her eyes, “I really like my birthday lasting this long!” She enjoyed the cake and coffee, too.

Could she choose her favorite birthday from all 99? “This one,” she quickly replied with another laugh.

Gene Leddy, a member of Parkview United Methodist Church has been treating Mrs. Scott to decorated birthday cakes for many years. Gene was one of Mrs. Scott’s second grade students when she taught in a country school. Today, Gene wished her a Happy Birthday and said, “Next year, on your 100th birthday, the cake is going to be really big!” She promptly replied, “Yes, I already have one month down. Now, just 11 more to go.”

What gift can you give someone on their 99th or 100th birthday? Time to let you in on another secret… Mrs. Scott had a composite photo of her kindergarten class in 1963 with her at the party. Celeste Engebretson, another former student, sent it to her and also added a list of the children’s names. Mrs. Scott remarked how much she loved looking at it. “I wish I had one for every year.”

If you still have one of these photos and care to share it with Mary Queen of Tots, send it to her in care of St. William’s Care Center at 103 North Viola Street in Milbank. Or, drop it by. She would love to see you. Just don’t try to fool her, she’s still as sharp as a No. 2 pencil.