featured3225 sports-featured1411
The Milbank VFW 16U Teener baseball team secured a spot at the 2020 VFW 16U Class A State Tournament. The Teeners earned their berth... 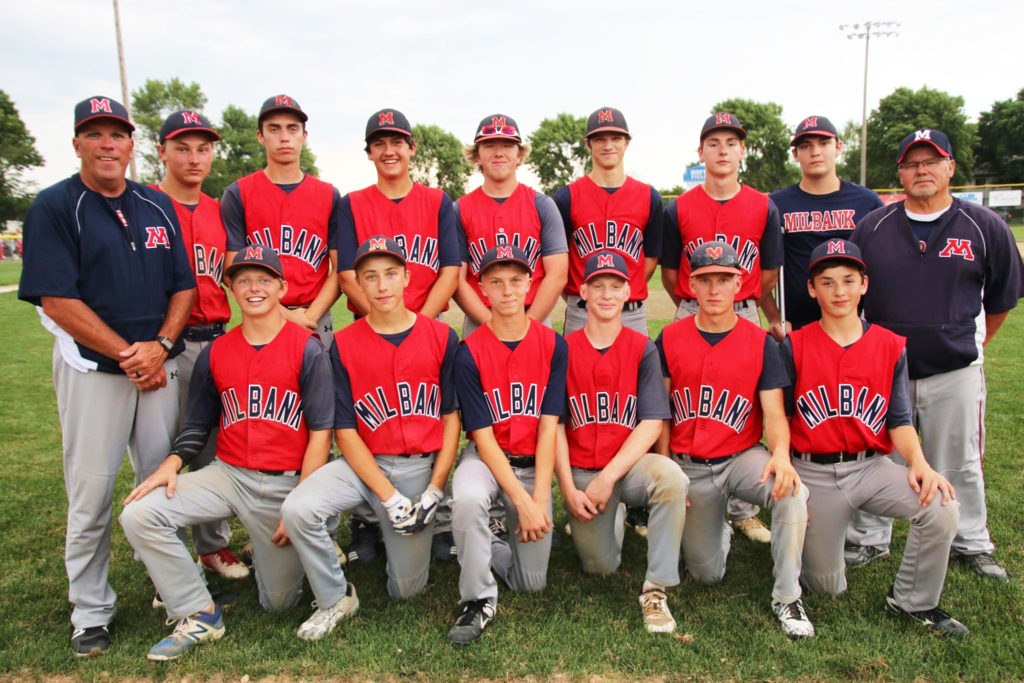 The Milbank VFW 16U Teener baseball team secured a spot at the 2020 VFW 16U Class A State Tournament. The Teeners earned their berth with a runner-up finish in the Region 2 tournament last weekend in Volga. Milbank will face KWL in the opening game at State on Friday, July 31, at 2:30 p.m. in Humboldt.

Milbank lost to Volga 9-4 in the opening game of region play, but came soaring back with an 11-10 victory over Dell Rapids. Milbank then edged out Madison Black with a score of 3-2 to advance to the championship game. However, Volga proved to be just as tough in their second meeting, and the Teeners fell again at 13-7.

Milbank scored first with one run in the opening inning of their first region game on Wednesday, July 22. Milbank posted the run on a stolen base. Volga answered with a run in the second,
two in the third, and five in the fourth to take the lead at 8-1. The Teeners rallied to plate three runs in the fifth, but took the loss at 9-4.

Milbank’s firepower was led by Kellen Hoeke, Mike Karges, and Isaac Schulte. They each drove in a run.

Kaden Krause started the game for Milbank on the mound. He surrendered eight runs on nine hits over four and one- third innings and struck out five. Cole Swenson threw one and two-thirds innings in relief.

Hoeke went 2-for-4 at the plate to lead Milbank in hits. The Teeners finished the game with a total of six hits. Karges, Swenson, Justus Osborn, and Schulte each contributed one hit.

Milbank took the game in dramatic walk-off fashion, thanks to Justus Osborn’s sacrifice to end the
game on Thursday, July 23.
Milbank fell behind early with Dells scoring five runs in the second inning. Milbank answered with a
lone run in the bottom of the inning when Weber hit a ground ball and was thrown out running to second
base. Osborn scored on the throw.
Milbank trailed 10-1 after four and a half innings before staging a big comeback. Karges kicked off the
rally with a double, and Swenson singled to produce four runs. He then scored after tagging up to cut into the
deficit at 10-6.
Osborn singled on a fly ball in the bottom of the sixth and brought Hoeke home to move the score to
10-7. The rally continued in the final inning when Krause doubled to score one. Weber then stole home.

Krause reached home on an error to tie the game even at 10-10. Osborn flew out to the second baseman, but
Hoeke tagged up and scored the game-winning run.
Milbank won the game with 12 hits. Swenson, Osborn, Weber, and Hoeke all managed multiple hits in
the contest with two each. Krause, Junker, Karges, and Aiden Rabe each added one hit.
Hoeke toed the rubber for the Teeners. He allowed four hits and six runs over two innings, striking out
two. Karges took the next two innings and gave up four hits and four runs before Osborn ended the game. He
gave up two hits and struck out seven batters.

Both teams were strong on the hill Thursday, July 23, but Milbank defeated Madison Black 3-2 to
advance to the championship contest.
The Teeners fired up the offense in the opening inning. Swenson drove in one run when he singled. The
locals added one more run in each the second and third innings. Madison scored one run in the third and one
in the sixth.
Milbank’s three runs came from nine hits. Krause, Swenson, and Schulte each led with two while
Karges, Osborn, and Weber added one apiece.
Schulte led things off on the mound for Milbank. He allowed five hits and one run over four and a third
innings, striking out three. Osborn came in for just over two innings and gave up one hit and one run while
sitting down five batters.

Milbank found themselves in a rematch with Volga, who proved to be too much. Milbank faltered 13-7
to take the runner-up title on Friday, July 24.
The teams were even 2-2 after the first inning. Volga went ahead 6-4 after two, and belted out five
runs in the third to widen the gap to 11-4 after three innings. Milbank kept plugging away and score two runs
in the fourth and one on the sixth, but it was not enough to overcome the early deficit.
Milbank scored its seven runs on 10 hits. Osborn led the locals with three hits in three at-bats. Krause
followed with two hits while Junker, Swenson, Karges, Rabe, and Schulte had one each.
Steve Ash was on the hill for the Teeners. He went four innings, allowing 12 runs one nine hits and
striking out one. Josh Pederson threw two innings in relief out of the bullpen.