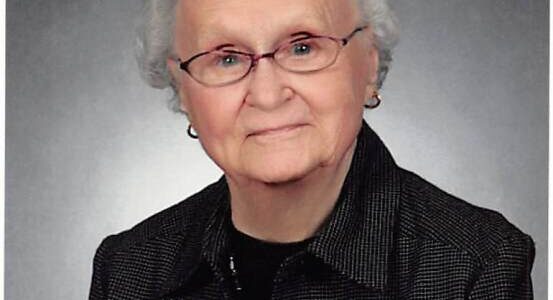 Mildred Treis, age 98, passed away on July 29, 2020, in Milbank. Graveside services will be held on Monday, August 3, 2020, at 11:00 a.m. at Milbank City Cemetery.  Rev. Marian Paulis will officiate. Visitation will be held on Sunday, August 2, from 5:00 p.m. until 7:00 p.m. at Mundwiler Funeral Home in Milbank. Casket bearers will be: Robert Treis, Randy Treis, Joel Treis, Tom Bossert, Floyd Hermans, and Bernie Hermans.

Born Mildred Rose Smith to Julian Rudisill Smith and Eunice Madeline (Scott) in Dames Ferry, Georgia on February 20, 1922.  Mildred graduated from Mary Persons High School in Forsyth, GA in 1939 and attended Western Georgia College for one year.  After taking wartime employment with Southern Bell in Macon, she met and married Army Sgt. Enlow Earl Treis in 1942.  They lived in Tampico, Mexico; Little Rock, Arkansas; Atlanta and Macon, Georgia before moving to Milbank in 1947.

Mildred worked as a supervisor for Milbank Mutual Insurance for 28 years before retiring to her quilting, reading, travel, southern cooking and journaling. She was a member of the Disabled American Veterans and American Legion Auxiliaries, Eastern Star and various church groups in the Central United Methodist Church.  For many years she hosted her famous Christmas Tree Open House during the season.

She was preceded in death by her husband, parents and siblings: Evelyn (Warren) Gold, Edna Merle (Merlyn) Gulck and infant brother.

Memorials may be given to the Enlow and Mildred Treis Music Scholarship at South Dakota State University or to the Milbank Community Thrift Store.