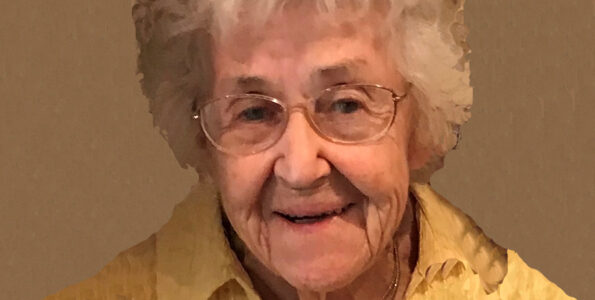 While maintaining social distancing guidelines, we are now able to gather for visitations and services. The use of face masks by attendees is recommended, and we will continue taking the necessary steps to keep our facility clean. The funeral and graveside services will be recorded.

June Comstock was born on June 21, 1920, in Howard, SD. She was the daughter of Albert and Mary Bradbury. June was the fifth of twelve children. She grew up and attended school in Howard, SD. June graduated from Howard High School in 1938. After high school, June moved to Minneapolis and worked at Dayton’s Department Store. She moved to Albert Lea, MN, where she worked at Montgomery Ward’s and Buttrey’s Department Stores. While in Albert Lea, June met Francis “Fran” Comstock. June and Fran married in May of 1942. She moved to Albany, OR, in 1943, while Fran was in the Army. The couple moved back to Albert Lea and later moved to Staples, MN.

In 1951, June and Fran moved to Milbank, SD. During their years in Milbank, they raised all four of their children and owned and operated Apex Dry Cleaners. They sold their business and retired in 1977.

In retirement, June spent her free time helping family members and friends, working at the Community Thrift Store, and serving on the Planning and Zoning Board. In June’s spare time she loved to play Bridge. She was a lifelong Bridge player and played until age 99. Spending time in the kitchen was a big part of June’s days. She was known for baking delicious cinnamon rolls – usually a batch of 100 at a time! Sewing was also a favorite pastime. Over the years, every family member received a handsewn quilted bedspread. Each year she would sew and embroider Christmas stocking ornaments for all family members and close friends.

June was a member of Christ Episcopal Church since moving to Milbank in 1951. Her church was very important to her throughout her life. June received recognition in 2013 for being the South Dakota “Honored Woman” in the Episcopalian Diocese.

June is survived by one sister, Margaret of Hotchkiss, CO; four children: Suzanne of Tubac, AZ; Tom (Susan) of Rochester Hills, MI; Mark (Linda) of Milbank, SD; Bryan “Buzz” (Barb Larrive) of Crystal, MN; seven grandchildren; and eight great-grandchildren. She was preceded in death by her parents; her husband, Fran; 10 siblings; and one grandson, Jeffrey Comstock.

In lieu of flowers, the family suggests memorials be given to the Christ Episcopal Church, Milbank SD.