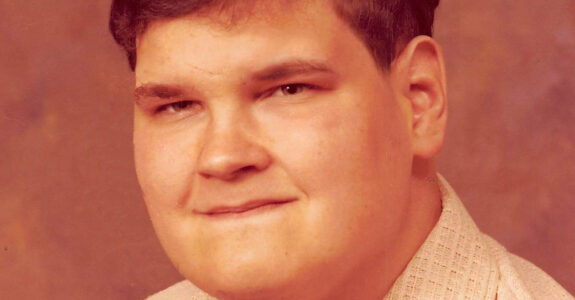 A private, immediate family only, graveside service will be held at the Clinton City Cemetery. Pastor Jim Rach will officiate.

Brian Sandberg was born on February 10, 1962, in Ortonville, MN, to Richard and Gloria (Schnaser) Sandberg.

Brian lived in rural Clara City, MN, and went to Nu Visions D.A.C. in Willmar. He enjoyed the van rides to Willmar.

Brian was a happy guy who enjoyed listening to music; he especially loved music by the Monkees. He enjoyed joking and laughing with his friends and relatives. Brian liked going fishing with his father, and he caught some pretty big walleyes! He also enjoyed shooting the basketball, bowling, and looking at pictures.Subway sandwiches were always a favorite food of Brian’s, along with pickles and ketchup.

Brian is survived by his father, Richard of Ortonville, MN; brother, Todd (Debra) of Ortonville, MN; niece, Alicia (Ryan) Poole, and their son, Carter; nephew, Travis (Makiah) Sandberg.
Brian was preceded in death by his mother, Gloria; and brother, Stephen.