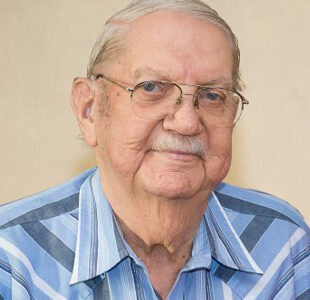 Arden Rodeen, age 85, of Wilmot, SD, died on August 24, 2020, at his daughter’s home in Corona, SD.  Funeral services will be held on Saturday, August 29, at 10:30 a.m. at Bible Fellowship Community Church in Peever, SD.  Rev. Scott Davis will officiate and burial will be at Wilmot City Cemetery.  Visitation will be held on Friday, August 28, from 5:00 p.m. until 7:00 p.m. at Mundwiler Faith Chapel in Wilmot.  Visitation will continue at the church on Saturday, one hour prior to the service.

While maintaining social distancing guidelines, we are now able to gather for visitations and services. The use of face masks by attendees is recommended, and we will continue taking the necessary steps to keep our facility clean.

Arden Wayne Rodeen was born on August 31, 1934, on the family farm about seven miles southwest of Peever, SD. He was the son of Frank and Mary (Nebben) Rodeen. He attended Agency Country School through the 8th grade. He grew up on the family farm and helped his dad on the farm, milking a small dairy herd by hand. Arden remembered helping hand pump water for the dairy cows and stock cows until his dad was able to purchase a gas engine and pump jack. When he was about ten years old, his dad became ill with Tuberculosis. After he returned home from treatment, he was no longer able to work. Arden and his brother, Dick, did the majority of the work to keep the farm operating.

In the 1950’s the Rodeen’s were able to purchase a loader tractor and a combine, which greatly helped with the farm chores. They were able to do custom combining for other farmers in the local area. Arden served in the National Guard until 1963.

On October 30, 1964, Arden was united in marriage with Bonnie Dragt in Anoka, MN. They were blessed with 55 years of marriage and three children: Terry, Shawn and Robin. After their wedding, they lived in Minneapolis and later farmed with his family until 1967.  He and Bonnie bought their own farm in 1966.  He was awarded a Soil Conservation Award from the SDSU Extension Office for Innovative Farm Practices in 1964.

Arden farmed and ranched until 1990 then was an over the road truck driver until 2005.  He served on the Wilmot School Board for 15 years and also served on the Lee Township Board. He was a faithful member of the Bible Fellowship Community Church in Peever.  He enjoyed hunting and playing card games including Skip Bo.  Camping and vacationing with his family, especially his granddaughters, were a highlight for Arden.  He was proud to have travelled to all 50 states, either on family vacations, adventures with Bonnie, or with his granddaughters.  He was very proud of his Norwegian heritage and never passed up a rhubarb dessert!