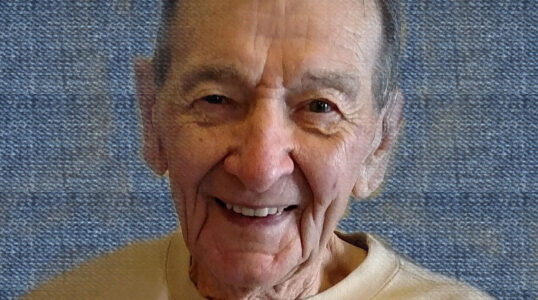 Calvin Cameron, age 89, of Wilmot, passed away on September 2, 2020. A memorial service will be held on Saturday, September 5, 2020, at 3:00 p.m. at First Presbyterian Church in Wilmot. Rev. Dr. DeVern Schwenn will officiate. Visitation will be at the church on Saturday, beginning at 1:00 p.m. until the time of the service. Burial will be in Wilmot City Cemetery.  Music will be provided by Sharon Ammann, organist and Kenneth Cameron, vocalist. Urn bearers will be Calvin’s grandchildren: Zachary Kreuser, Jorey Cameron, Kayla Cameron, Taylor Cameron, Ross Cameron, Grant Cameron, Cameron Ackley, Aaron Ackley, and Nathan Ackley. Honorary bearers will be Calvin’s great-grandchildren: Siobohn Cameron, Asa Cameron, Amani Cameron, Aiden Cameron, and Reyna Cameron.

While maintaining social distancing guidelines, we are now able to gather for visitations and services. The use of face masks by attendees is recommended, and we will continue taking the necessary steps to keep our facility clean. For those who prefer or require continued precautions, webcasting and/or livestreaming will be viewable on this website.

Calvin Eugene Cameron was born on May 4, 1931, in Sioux Falls, South Dakota.  He was the son of James and Francis (Younker) Cameron.  Calvin grew up on a farm in Lake Township, Roberts County, near Big Stone Lake.   As a young man, he enjoyed the outdoors and flying planes.  Calvin obtained his Student Pilot Certificate on June 11, 1947.  He was united in marriage with Wylah Kruger on June 29, 1951.

In his early years, Calvin often talked about how he and Wylah would fish on Big Stone Lake for crappie and he also enjoyed hunting ducks on Bullhead Lake with friends. Calvin enjoyed farming raising mostly wheat, corn, and oats on the Cameron homestead. Raising beef cattle was a primary role on the Cameron farm. Around 1978, Calvin took a maintenance job with Hartford Beach State Park, and was employed there for more than 20 years.  He retired in 2001. His work ethic, sense of humor, and wit were all part of his character. He took pride in making sure the state park was neat and clean. In 1990, Calvin was named South Dakota Seasonal Employee of the Year.

Calvin loved the Bison Football Team from North Dakota State University. He never missed a Saturday game, playoffs, or all those National Championships, listening on KFGO with his Sony Walkman. In 2015, he was able to travel to the Fargo Dome and watch his Bison play in person.

Calvin was a faithful member and raised his family in the Zion Community Church. He had a beautiful tenor voice and loved singing in the men’s quartet. Calvin loved the Lord and longed for the day to be reunited with Wylah, the love of his life.