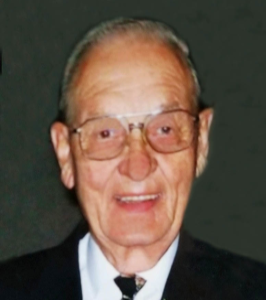 Reverend Marlyn E. Kuper, age 91, of Watertown, SD, passed away peacefully, with his daughter by his side, on Tuesday, September 15, 2020 at Sanford USD Medical Center in Sioux Falls.

Reverend Kuper’s funeral services will be recorded and posted to our website when available.

Burial will be at Mount Hope Cemetery in Watertown, SD. Military Honors will be conducted by Codington County Post 17 of the American Legion in Watertown.

Reverend Marlyn Eugene Kuper was born November 23, 1928 to Harm and Myrtle (Lage) Kuper in Marvin, SD. He attended grade school in a country school and also school in Marvin. After grade school he entered the service right after World War II had ended and served in what was then the Army Air Force and served overseas in the South Pacific. He was a member of Post 17, American Legion for 74 years (2020) and served as Commander in 1968. He was also a member of BPO Elks for 62 years (2020).

After his honorable discharge from his military service, he spent a couple years working at different jobs in Sioux Falls. He then returned back to Marvin where his parents owned and operated a grocery store. While helping his parents, he met his future wife, Corrine. After a couple years of courtship they were married. To this union, three children were born, Kristie, Kathie and Kerry Kuper. After a honeymoon through Canada and western United States, they resided in Milbank where Corinne was employed at Dakota State Bank and Marlyn went to work for the Milbank Hereld Advance.

Marlyn continued in the newspaper business for approximately 14 years and then pursue a career in the finance business beginning with running a couple different small loan companies and then started a banking career in Plankinton, SD, and continued until retiring in 1994 as President of State Bank of Wendell, MN. He was a Gideon for 18 years and also did pulpit supply for some 15 years during his banking career, preaching in several different denominations.

After his retirement from banking he pursued the ministry taking correspondence courses for three years while he and Corinne worked on the mission field in Peoria, AZ with World Gospel Mission. In 1999, after a crash course in Seminary, Marlyn was appointed to the United Methodist Church in Scotland, SD where he served for three years. After retiring in Scotland, (because of age), Marlyn was then appointed as Visitation pastor at Central United Methodist Church in Milbank. In 2012, they resumed going back to Arizona during the winter months.

He was preceded in death by his parents, his son, Kerry, and one brother, Melvin.