Tom Adler, patriarch of one of Milbank’s oldest families, died unexpectedly on September 29, 2020 of an apparent heart attack. Three months ago, my... 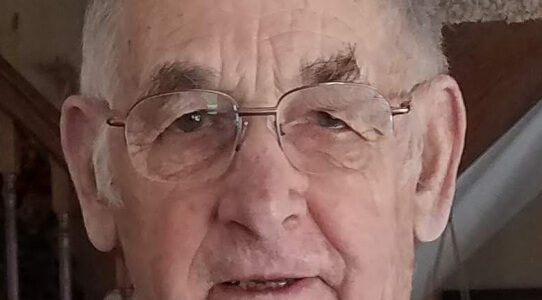 Tom Adler, patriarch of one of Milbank’s oldest families, died unexpectedly on September 29, 2020 of an apparent heart attack.

Three months ago, my dad asked me to write his obituary.  He told me he had no plans to die anytime soon but felt it should be ready to go.  He made me promise to “get personal and use plenty of humor.” If any of you are offended by the irreverence of it, you really didn’t know our dad very well.  Respectfully submitted, Jean Ellen Woolworth.

Tom was the third of four children born to Ernie and Phoebe (Wylie) Adler on October 18, 1932, in Milbank.  Tom and his siblings walked uphill both ways to attend school at Grant Center Number 4.  In 1941, he started attending school in town.  He began taking lessons on the clarinet when he was age 10 and was invited to play in the high school band when he was 12.  In addition to music, Tom was active in FFA. Tom was named the State Star Farmer Award and the American Farmer degree.  He was also voted the State FFA’s treasurer.  He was also a member of the FFA’s National Band as a clarinetist.  Tom graduated from Milbank High School in 1950, along with his future wife, Janet Berkner.  His children will tell you that their mother, valedictorian of their class, married the class clown.  Each year Tom holds a class reunion at his home for his classmates.  The remaining graduates enjoy drinking root beer floats and reminiscing.

In 1953, Tom left for the Army and was stationed at Fort Riley, Kansas.  Shortly after arriving, it became known to Tom that the Army Band was looking for members.  Tom passed the audition and would spend his entire time in the service as an Army Bandsman.  He has been quoted as saying, “I had the choice of the clarinet or heavy artillery, and the clarinet looked pretty darn good.”  Tom and Janet were to have been married in Milbank in the fall of that same year, but due to a clerical error, Tom was unable to leave Kansas.  So, their families packed up and headed to Manhattan where the couple was married at Danforth Chapel on the campus of Kansas State University.

Private Adler was transferred to Fort Eustis, Virginia, to continue his career as a clarinetist.  The couple was there a short time when he was informed he was being sent to Fort Mason near San Francisco.  When he asked why he was given such a plum assignment, he was told his name was pulled out of a hat.  Tom was a member of the 22nd Army Band.  The 26-piece band’s primary assignment was playing for troop ships on the pier near Fisherman’s Wharf.  The band also spent time at the Naval Base at Treasure Island.  He spoke fondly of his time in San Francisco and the couple was finally able to travel to California after Tom sold his herd of dairy cattle nearly three decades later.  In addition to being a talented musician, Tom was an excellent craftsman.  He taught himself how to make tooled leather goods which he sold on weekends at craft fairs.  Many of those items are still in use today.

In 1955, he was discharged from the Army and the couple returned home to Milbank with their infant daughter, Jane, and Tom resumed farming with his father.  The Adlers were one of the first families in Grant County to put in a pipeline system in their milk house.   The couple sold their cows and cattle in the late 1970s.  Tom always joked that selling the cows was like getting out of jail.  Despite the long hours spent farming and milking cows, Tom and Janet never missed any of their children’s school events.  Tom would slip in at the last minute but was always in attendance.  They continued to attend their children’s events out of state until Janet’s untimely death in 2006.

Always handy and creative, Tom embarked on a new career.  He began building and remodeling houses.  Some of his remodeling projects around Milbank include the Mill Theater, the C.E. McGowan House, and the roof of the original Carnegie Library.   But his biggest project was transforming the Milwaukee Road depot into a home.  He worked for many years on this project in his “free time.”  He and Janet moved from the farmhouse to the remodeled depot in the 1980s and Tom has lived there ever since.

Tom and Janet believed strongly in higher education and they insisted their children attend college even though they could not afford to send them.  All three kids figured out how to pay for school and all three of them are college graduates.  Tom was even the subject of daughter Jean Ellen’s master’s thesis which covered his years as a musician. Tom and Janet were music lovers and when Janet passed away Tom established a Fine Arts scholarship in her name.  He was also a benefactor of the Chautauqua Concert Series.

Because the couple was unable to travel when they were milking cows, they made up for it later in life.  After Janet’s passing, Tom did a considerable amount of traveling and had been to 49 of 50 states.  The only one missing: Hawaii.  He took many bus trips with his dear friend, Nancy Bauerle. He took a memorable trip with his daughters and their husbands and friend, Nancy, on the Danube in 2015.  While in Germany it was fun to see so many businesses and streets with the name of Adler.  His daughters were speaking with another couple who said to them, “Your dad sure looks good for 87.”  The girls were surprised to hear this, since he was 82 at the time.  If you are going to lie about your age, say you are older than you really are. His children all share his love of travel and have strict instructions that his ashes are to be mixed with Janet’s and spread throughout the world.  His children inherited his talents.  Jane is an artist.  Jean Ellen is a musician.  And John is a builder.

Ever the farmer, Tom started hundreds of plants each year in his sun porch and shared a garden with his friend, Vi Hoeke.  Never one to sit still, he stayed active until the end.  Tom and Vi were driving to the garden to dig potatoes the day he died.  He enjoyed taking drives and made friends everywhere he went.  He had the gift of gab and could talk to anyone.

Tom was a proud to be a Democrat, even though he rarely voted for a candidate who won.  He would have proudly cast his ballot for Joe Biden in November. He was the chair of the Grant County Democratic Party for many years.  In 1976, he ran for the State Legislature even though he knew it would be a losing battle.  He loved discussing politics with both allies and opponents.  He enjoyed current events and was always aware of what was going on in the world.  In the Adler household there is a saying, “If you don’t vote, you lose the right to complain.”  He believed strongly in his civic duty and was still a commissioner of the Planning and Zoning Committee.  He began serving on the board in 1989. He also volunteered for the annual Thanksgiving meal at Parkview Church and helped feed the residents at the nursing home.  Often the residents he assisted were younger than he.

Tom was preceded in death by his parents and his siblings: Joe, Jim, and Phoebe Jane.  He was the last member of his generation, having lost all his first cousins. His beloved Janet died in 2006.  He and Janet also lost two infant daughters: Pauline and Christine.

He is survived by his daughter, Jane and her husband Shane Reed of Westiminster, CO;  daughter, Jean Ellen and her husband Rich Woolworth of Monticello, WI; and son, John and his wife Cathy (Collins) who are full-time RVers.  He was the proud grandfather of two grandsons: Duncan Thomas McGonagle, a student at South Dakota School of Mines, and Sean Berry of Chesapeake, Virginia and his wife Marie.   He also is survived by his great-grandchildren: Marcus and Bailey Berry.  Tom is also survived by his nephew, Joel Adler with who he had a special relationship.  His children are very grateful for all that Joel has done for Tom over the years, especially after Janet’s death.  Tom is also close to Joel’s mother, Keo Adler.

We know that many of you are surprised and disappointed that Tom didn’t want a funeral, as were we.  Many years ago, he told his children that he did not want a service.  His wish was that his family would gather and tell stories about him instead. The children promised that they would abide by his wishes.  Tom thought a big funeral was frivolous and indulgent.  The kids think he was just being cheap.  His ashes will be divided among his three children and they have instructions to scatter them on their travels.  It is his wish that some of them will be taken on safari in Africa, a trip he had always hoped to take.

In lieu of flowers, memorials may be sent to Tom’s address:  15096 Adler Drive Milbank, SD  57252.  His kids will determine a suitable charity once they’ve all had time to process his sudden passing.