Ralph Junior Stinson, 89, passed away on October 15, 2020, after a sixteen-year battle with Alzheimers. Visitation will be held one hour before the... 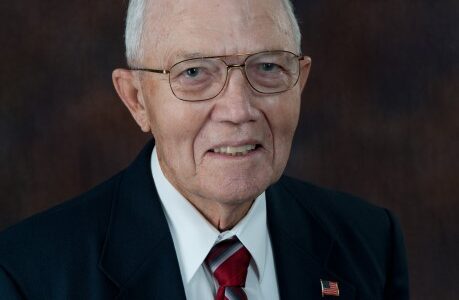 Ralph Junior Stinson, 89, passed away on October 15, 2020, after a sixteen-year battle with Alzheimers. Visitation will be held one hour before the funeral services at the American Lutheran Church in Milbank, SD. Funeral services will be held at 2:30 p.m. on Monday, October 19th, 2020, with burial in the Milbank City Cemetery.

While maintaining social distancing guidelines, we are now able to gather for visitations and services. The use of face masks by attendees is recommended, and we will continue taking the necessary steps to keep our facility clean. For those who prefer or require continued precautions, webcasting and/or livestreaming will be viewable on this website.

Ralph was born in Owanka, SD, on April 12, 1931, to Velma (Schoenhard) and Ralph Stinson. Ralph married Lois Clickner October 16, 1952, in Vivian, SD. They had four children: Nita, Belva, Jason, and Richard during their 67 years of marriage. Since her passing earlier this year, Lois has been patiently waiting for Ralph to bring her roses and dance for their 68th wedding anniversary.

Ralph was drafted into the Army and was stationed in Fort Meade, MD. He worked at Milbank Mutual Insurance Company for a majority of his life and continued his insurance career by starting Stinson Adjusting Company after his early retirement. Ralph rarely missed supporting his children in their extracurricular activities in the Milbank School system and continued that tradition with his grandchildren.

While Ralph struggled with his memory in his later years, he did not lose his sense of humor. He was a humble, tolerant, caring soul who made you feel as if he actually remembered your name. Ralph’s interests included his involvement in the American Lutheran Church of Milbank, SD; his CPCU designation on top of various insurance awards and certifications, the Employer Support of the Guard and Reserve, American Legion Baseball, holding the office of mayor in Milbank, SD, and the time he spent hunting, fishing, and many other outdoor activities with his family and friends. Ralph never could drive past an auction sale or garage sale without stopping as his family could tell you!

Memorial donations may be made in his honor to the Alzheimer’s Association – South Dakota (www.alz.org/sd) or the It Only Takes a Spark Cancer Walk (www.takesaspark.org/support).