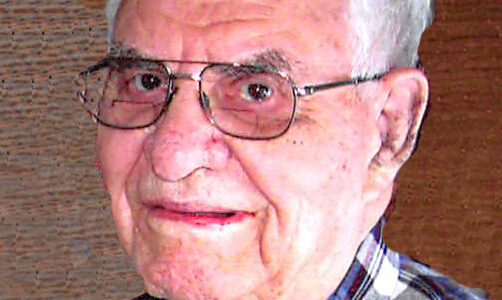 A private family service will be held on Friday, October 30, at 1:00 p.m. at Trinity Lutheran Church in Odessa, MN. Rev. John Ramsbacher will officiate, and burial will be at Mound Cemetery in Ortonville.  Visitation will be held one hour prior to the service on Friday at the church.

Livestreaming will be viewable at the bottom of this page at 1:00 p.m. on Friday, October 30.

Arthur Michael Hoernemann was born on September 18, 1925, to Al and Minnie (Schrock) Hoernemann. He was the eldest of four children. Art was united in marriage to Ruth Johnson on September 8, 1951, at Elim Lutheran Church in Clinton, MN. Farming along the Minnesota River for 24 years, Art and Ruth relocated to a farm two miles east of Ortonville in 1975 when the Big Stone National Wildlife Refuge was established.

A quiet man of few words, Art seemed to have found his voice as he got older, reminiscing about growing up in what was then, the thriving village of Odessa. He spoke of the stockyards, breaking horses, milking, and delivering milk to the townsfolk before school. With friends, he would ice skate on the Minnesota River, hunt, and play basketball and baseball. He loved saying how the Odessa town hall, a WPA project that his father helped build, used to be the nicest basketball floor in the area. Art saw tremendous change throughout the years. He started farming with a team of horses then transitioned to “Art’s tractor” at the age of 12 which his father refused to drive.

Art moved into town in 1987, but never really retired from farming. Once he settled down to figure something out, he always felt he could do most anything (except spell and sing). He took classes and became quite an accomplished wood carver, chip carver, and carving detailed scenes on moose antlers.

He was preceded in death by his wife, Ruth; parents; brother, Boyd, and sister and brother-in-law, Loretta and Jim Sheaver.

Art resided at Fairway View Memory Care for the past five years. The family is most appreciative for the thoughtful care and consideration extended to Art and the family by Sherrie, Emily, and all their staff. The family would also like to thank Rice Hospice and the staff at Ortonville hospital