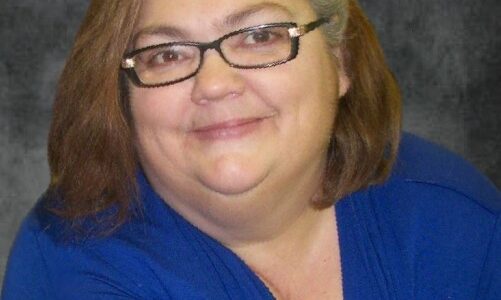 Visitation will be held on Tuesday, November 3, from 11:00 a.m. to 1:00 p.m. at Mundwiler Funeral Home in Milbank. A graveside service and interment will take place on Tuesday at 2:00 p.m. at Wilmot City Cemetery. Pastor Bryan Biggs will officiate.

While maintaining social distancing guidelines, we are now able to gather for visitations and services. The use of face masks by attendees is required, and we will continue taking the necessary steps to keep our facility clean. For those who prefer or require continued precautions, webcasting and/or livestreaming will be viewable on this website.

Laurie Ann Frances (Nordquist) VanHout was born on January 18, 1965, to Harold Odean Nordquist and Beverly Joan Cameron in Milbank, South Dakota. She grew up and attended school in Wilmot, SD, graduating in 1983. Laurie married Myron VanHout. They were blessed with three children: Myron Jr., Heather, and Jesse. They lived in Milbank some time and then returned to Wilmot. Laurie loved the Wilmot area as it held many cherished memories from her childhood.

Laurie gained her love for food and cooking while in high school when she worked at Shady Beach Supper Club. Later she worked as a cook at Wilmot Care Center, St. William’s Care Center, and Browns Valley Care Center. Even in her off-time, Laurie loved to cook, and if there was an opportunity to volunteer to cook for an event she would. She was a talented baker and candy maker and would sell holiday treats and graduation mints. She organized a weight loss group, too, which she enjoyed because there was so much talking about making food.

Laurie also loved her volunteer work with Santa Day in Wilmot, gathering donations and prizes for the kids in the community. Even when her health was failing, Laurie continued to volunteer where she was able. She enjoyed rummage sales and would always try to be the first one there. In later years, she operated The Barn, a rummage sale store, in Wilmot, and enjoyed talking to people that would stop in.

Laurie was a member of Milbank Baptist Church and enjoyed the fellowship and potluck dinners. She operated VanHout Variety in Wilmot, giving kids a place to go after school. She was a cook at Hanson’s Wreck in Milbank, and especially enjoyed meeting so many people. She also loved children and loved to babysit.

Every year, Laurie would prepare each of her children a special birthday meal of their choice. She would also throw a New Year’s Eve party where she would serve exotic foods for all the kids to try. She adored her grandkids and would shop online with them; she liked to stay up to date on the latest fashions. Laurie attended Wilmot sporting events. She liked to sit in “her spot” and was known to bring her own butter for the popcorn. She was the loudest cheerleader and would make sure to have treats for the kids after the game.

She was preceded in death by her parents: Harold and Beverly; one brother, Jeff Nordquist; parents-in-law, Joe (Diane) VanHout; and brother-in-law, Jimmy Rufer.