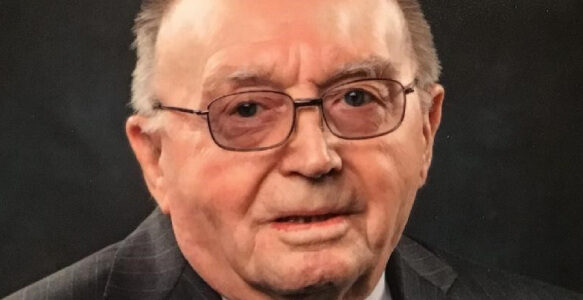 Funeral services will be held on Friday, November 6, 2020, at 2:00 p.m. at Living Word Lutheran Church in Milbank.  Rev. Kent Groethe and Rev. Dr. DeVern Schwenn will officiate, and burial will be at Milbank City Cemetery.  Visitation will be held on Thursday, November 5, from 5:00 p.m. until 7:00 p.m. at Mundwiler Funeral Home in Milbank and will continue one hour prior to the service on Friday at the church.

While maintaining social distancing guidelines, we are now able to gather for visitations and services. The use of face masks by attendees is recommended, and we will continue taking the necessary steps to keep our facility clean. For those who prefer or require continued precautions, webcasting and/or livestreaming will be viewable at www.mundwilerfuneralhome.net.

Frank Edward Brown was born on November 29, 1924, in Milbank, SD, to David and Annette (Dragt) Brown. He attended rural school at Grant Center #5.

On September 10, 1947, Frank was united in marriage with Mary Ann Skaarer in Milbank. The couple made their home just outside of Milbank where they raised their three children: Jerry, Nancy, and Loretta. Frank lived and farmed in the Milbank area for all his life. When he retired in 1985, he went to work driving truck and driving school bus.

A lifelong member of the community, Frank was very involved with the town train festivals. He was a member of American Lutheran Church where he was Sunday School Superintendent and later became a founding member of Living Word Lutheran Church. Frank served on the church board, Grant County School Board, and also on the Board of Community Oil. As a young man, Frank enjoyed playing softball, and was the last surviving member of the Willow Bend Softball Team.

In his free time, Frank enjoyed bowling and taking his wife, Mary Ann, dancing. The two also enjoyed traveling and took many trips to California and Arizona. He loved a slow drive to check the crops. Frank enjoyed coffee time with his friends, but most of all, loved the time he spent with his family.