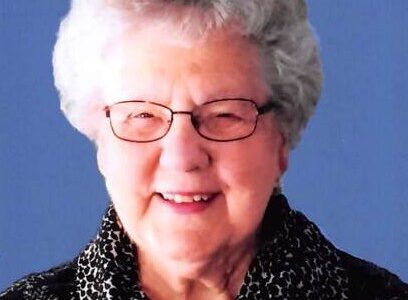 Due to Covid-19 concerns, a Mass of Christian Burial will be held privately for immediate family and grandchildren only. For other family members and friends who do not attend the service, the Mass will be recorded and viewable on our website (www.mundwilerfuneralhome.net) on Friday, November 13, 2020.

Gladys Irene Meyer Lynde was born on August 10, 1923, in LaBolt, SD.  She was the daughter of William and Emma (Rooth) Meyer. Gladys attended school in Revillo and graduated from Revillo High School with the Class of 1941.  She attended Northern State Teacher’s College in Aberdeen, SD, and obtained her Teaching Certificate.  She taught school for nine years at Adams #4, and at Adams #2 in Albee, SD.  She taught in the Revillo Public School System, teaching kindergarden, first, and second grades.

Gladys was united in marriage with Charles “Pete” Lynde on June 22, 1948, at Annunciation Catholic Church, in Revillo.  They were blessed with three children: John, Mary Jo, and Thomas.

Gladys worked as a clerk at the Revillo Post Office for 11 years.  She was appointed Postmaster and worked another 17 years.  She retired with 28 years in Postal Service.

Gladys was a faithful member of Annunciation Catholic Church.  She was a member of the altar society and a 63 year member of the Catholic Daughters. She enjoyed gardening and flowers.  She also enjoyed reading and playing cards.  Most importantly, Gladys adored her grandchildren and great-grandchildren.