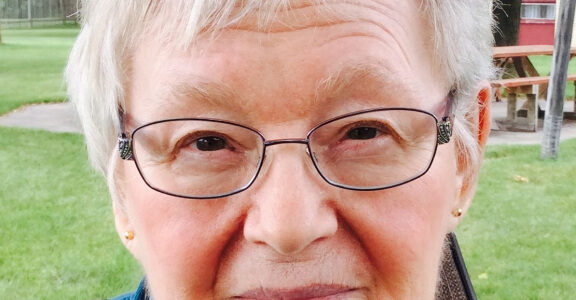 The use of face masks by attendees is required and the family requests maintaining social distancing guidelines. For those who prefer or require continued precautions, webcasting and/or livestreaming will be viewable on this website and Valley Baptist Church’s Facebook page.

Bonnie Lulu Miller Schulte was born on August 8, 1935, in Corona, SD.  She was the daughter of DeLyle and Marion Hooth Miller.  Bonnie accepted Christ as her Savior at a young age and was baptized around the age of 13 at the Corona Methodist Church. She graduated as Valedictorian from Corona High in the Class of 1953.  After graduation, Bonnie worked for Milbank Mutual. She was united in marriage with Dale Schulte on September 1, 1956, at First Baptist Church in Corona.  They were blessed with three children: Barbara, Brenda, and David.

Bonnie and Dale farmed together in Kilborn Township, Grant County, SD.  She was a dedicated and devoted farm wife and mother.  She sewed her daughters’ clothing and made wonderful bread.  She was a faithful member of Valley Baptist Church and active with Women’s Missionary Fellowship.  She also was a choir member and church pianist.

Bonnie and Dale retired from farming in 2000 and moved into Milbank.  They moved to Trail Ridge Retirement Community in Sioux Falls, SD in 2006.  They returned to Milbank in 2012, living at Golden Living Center.  Dale passed away on December 2, 2014.  Bonnie continued to reside in Milbank until her death.

Bonnie was preceded in death by her parents: DeLyle and Marion; her husband, Dale; brothers: Milford Miller, Donald Miller; and sister, Margaret Rohlfs.

Memorials are preferred to the Gideons or Samaritan’s Purse.