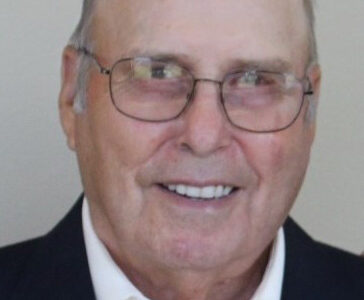 Funeral services for Duane will be held on Wednesday, November 25, 2020, at 2:00 p.m. at Peace Evangelical Lutheran Church in Milbank. Visitation will be held on Tuesday, November 24, from 5:00 p.m. to 8:00 p.m. at Mundwiler Funeral Home. Visitation will continue one hour prior to the service at the church on Wednesday. Pastor Albert Meier will officiate, and interment will be at Milbank City Cemetery.

While maintaining social distancing guidelines, we are now able to gather for visitations and services. The use of face masks by attendees is recommended. For those who prefer or require continued precautions, webcasting and/or livestreaming will be viewable at the bottom of this page.

Duane Harold Lambrechts was born on July 12, 1935, in Mazeppa Township in Grant County, SD, to Harold and Josephine (Westphal) Lambrechts.  He was the third of five children. He was a hard-working farm boy and attended rural school and South Shore High School.  He joined the United States Air Force in 1953, serving for five years during the Korean Conflict. He was stationed in Japan and Guam. After his discharge from the Air Force, he was hired by the city of Milbank as a police officer where he worked for ten years.  He transferred to the Milbank Street Department, working his way to eventually become the Street Superintendent until his retirement in 1997.  Throughout the years, he owned the businesses: Golden Arrow Restaurant and H & L Gravel.

He married Arlys (Schultz) Lambrechts on July 25, 1959, in Wilmot, SD.  Together, they raised two children: Rhonda and Bryan. During their 62 years of marriage, they enjoyed traveling, camping with their family, and wintering for 18 years in their home in Texas.

Duane enjoyed many outdoor hobbies throughout his life which included fishing, trapping, hunting, and golfing.  He also worked to obtain his pilot’s license and flew his own plane.

Duane was a member of the Milbank VFW and American Legion.  He was also a charter member of The Last of the Fast Guns Club.  Church was an important part of his life.  In his later years, he served as usher and prepared communion each month. Duane enjoyed socializing daily with various coffee groups at different restaurants around Milbank.

Duane was preceded in death by his wife, Arlys; his parents: Harold and Josephine Lambrechts; one brother, Eugene Lambrechts; and three sisters: Annabelle Meany, Rosezella Hogan, and Donna (Bernard) Hawkinson.