Betty Schell, age 93, of Milbank, died Friday, November 20, at St. Williams Care Center in Milbank. Mass of Christian Burial will be at... 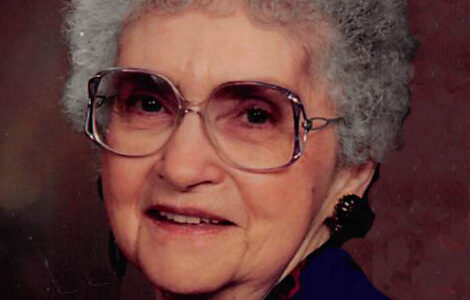 Betty Lou Chamley was born on August 25, 1927, in Lacrosse, WI, to Lloyd and Ruth (Crooks) Chamley. Her family moved to the Summit, SD, area where she grew up, and attended country school and Summit High School. Betty married Ray Schell on February 28, 1946, and they moved to Milbank, where Ray was a long-time employee of Dakota Granite. Betty and Ray built a house on 5th Street, and lived there until Ray’s death in 2006. Betty was a homemaker, raising their four children: Ronald, Teresa, Mary, and Imelda, and worked as a nurse’s aide at St. Bernard’s Hospital.

Betty was a member of St. Lawrence Catholic Church. She enjoyed embroidery, and working with flowers and plants. Betty had a big heart; she was known for taking care of many stray animals. She enjoyed feeding and watching the birds that would come to her feeder. Most of all, Betty cherished time spent with her grandchildren.

She was preceded in death by her parents: Lloyd and Ruth Chamley; husband Ray; brothers: Donald Chamley, Walter Chamley; and sister, Irene Bakken.