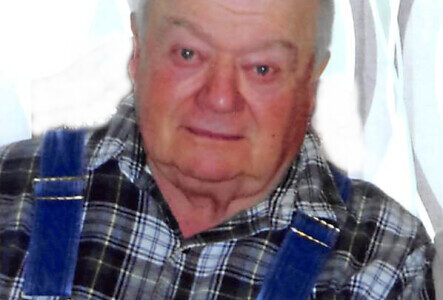 Mass of Christian Burial will be held on Friday, November 27, at 10:30 a.m. at St. Lawrence Catholic Church in Milbank, celebrated by Father Gary DeRouchey.  Burial will be at St. Mary’s Catholic Cemetery in Wilmot. Visitation will be held on Thursday from 5:00 p.m. until 7:00 p.m. with a prayer vigil at 7:00 p.m. at St. Lawrence Catholic Church. Visitation will continue Friday morning, one hour prior to the Mass. Friends and family are invited.

While maintaining social distancing guidelines, we are now able to gather for visitations and services. The use of face masks by attendees is recommended. For those who prefer or require continued precautions, webcasting and/or livestreaming will be viewable on this site, below this obituary.

Richard Dean Hendricks was born on April 21, 1941, in Beardsley, MN, to Norbert and Ann (Reddy) Hendricks.  He was the oldest of 12 children born into a hard-working farm family. Richard told many stories of his young adventures on the farm and working alongside his beloved father. Richard attended school in Beardsley. He joined the Minnesota National Guard and proudly served for six years. He also worked in construction and at the Big Stone Cheese Factory before returning to his love of farming.

He married Dixie Drewelow on April 27, 1968, in Beardsley, MN. They were blessed with 10 children which were Richard’s pride and joy along with his grandchildren. The family moved to rural Corona in 1971 where they have undertaken every farming challenge from dairy farming, to swine, to beef cattle, and working the land.

Richard loved God and family before anything else in life. He spent many hours worrying and praying for those he loved from his children, to his brothers and sisters, to his mother, and his neighbors. He believed in working hard and always doing your best no matter what the task. He wanted his children and grandchildren to always strive for excellence and be well-educated. He instilled in his children the saying, “A family that prays together, stays together.”  Outside of family life, Richard enjoyed hunting, learning about history, and putting puzzles together.

He was preceded in death by his father, Norbert Hendricks and his father-in-law and mother-in-law, Warren and Marion Drewelow.

In lieu of flowers, the family suggests memorials be given to Heart of the Whetstone Valley Horizons. (address is below)