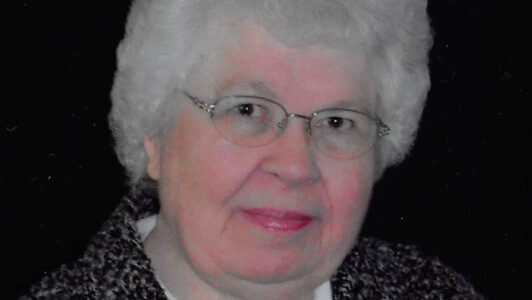 While maintaining social distancing guidelines, we are now able to gather for visitations and services. The use of face masks by attendees is recommended. For those who prefer or require continued precautions, webcasting and/or livestreaming will be viewable at the bottom of this page.

On March 27, 1932, Marjorie was born to Gus and Mildred Gunderson outside of Langford, SD, on a farmstead. She was raised in Langford and graduated Salutatorian from Langford High School in 1950. After graduation, she attended Northern State College and received her Teaching Certificate. She taught at a rural country school and then attended Lutheran Bible Institute in the Twin Cities where she also worked at a major department store for a period of time.

Marjorie was united in marriage to Elvin Sprung on September 12, 1952. They farmed outside of Corona on their homestead for many years and where they raised their four children.

Music was a very important part of her life. She started playing piano at a very young age and by sixth grade, she was playing in churches and school concerts. She continued her musical talent at various churches throughout the Milbank area. Marjorie was very active in the Corona, SD, community including being a director of Vacation Bible School and the Sunday School program, a member of the Ladies Aide group, and the Corona band mother’s, and lead the church choir in Milbank and Wilmot as well as being the organist.

A major part of Marjorie’s life was her faith in the Lord. She lived that faith in every aspect of her life. One way she expressed that was through her music including writing her own music and using her musical ability to worship, praise, and serve The Lord in the various positions she held. That culminated into giving a concert called “My Psalm of Praise.”

She was preceded in death by her husband, Elvin; her parents; her brother, Richard Gunderson; and granddaughter, Nicole Sprung.