sports-featured1487
The Milbank boys’ and girls’ cross country teams completed the 2020 season with an awards ceremony on November 16 in the Milbank High School theatre. Head... 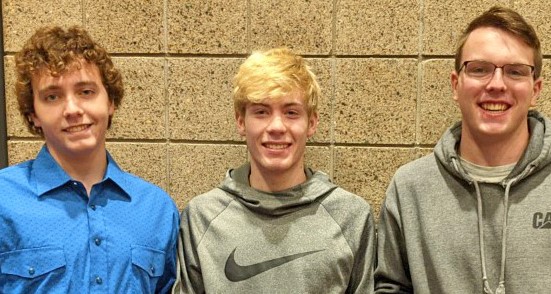 The Milbank boys’ and girls’ cross country teams completed the 2020 season with an awards ceremony on November 16 in the Milbank High School theatre. Head coach Eric Townsend presented the awards. Nick Batchelor and Ashlynn Batchelor each earned a Most Valuable Runner award. Grant Van Peursem, Ellie Neugebauer, and Ashlee Van Hoorn were named the Most Improved Runners. The Rookie of the Year awards went to Isaac Johnson and Ashlynn Batchelor. The Pride of the Paw went to Will Karels, Maiah Brown, and Maurina Street for their sportsmanship, coachability, and positive attitudes.

Nick Batchelor and Ashlynn Batchelor were the lone place winners for Milbank at the 2020 South Dakota Class A Cross Country Meet in Rapid City. Nick captured fourth place and Ashlynn came in fifth.

The boys’ team finished as the Northeast Conference runner-up, was crowned the Region 1A champion, and placed sixth as a team at state. The girls were NEC and Region 1A champions and took home fourth place from the state meet.

Townsend extended a big thank you to: Whetstone Creek Golf Course for allowing us to host our home meets, The Milbank Fire Department for escorting the team out of town for the state meet, KMSD Radio for the coverage and Coach’s Corner, The Valley Express for the excellent online coverage, Big Stone Therapies for the prevention and care of  injuries, The Grant County Review for their great weekly results coverage, and Deb Grismer and the Hermosa Our Savior’s Lutheran Church for allowing the use of their church facility during the state meet.

Townsend continued, “Another huge thanks needs to be given to all the parents for their great support. Finally, thanks to the athletes for all their efforts and hard work throughout the season, especially to the seniors – Isaac, Allison, Amaya, and Greta. Your leadership will be greatly missed, and we wish each of you good luck in the future.”