THE FUNERAL SERVICE HAS BEEN POSTPONED (DUE TO WEATHER).  IT IS RESCHEDULED FOR SATURDAY, DEC 26 AT 2:00 PM AT AMERICAN LUTHERAN CHURCH.  VISITATION... 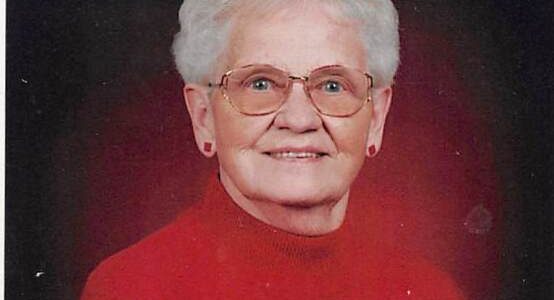 THE FUNERAL SERVICE HAS BEEN POSTPONED (DUE TO WEATHER).  IT IS RESCHEDULED FOR SATURDAY, DEC 26 AT 2:00 PM AT AMERICAN LUTHERAN CHURCH.  VISITATION WILL BE HELD ONE HOUR PRIOR TO THE SERVICE AT THE CHURCH.

While maintaining social distancing guidelines, we are now able to gather for visitations and services. The use of face masks by attendees is recommended, and we will continue taking the necessary steps to keep our facility clean. For those who prefer or require continued precautions, webcasting and/or livestreaming will be viewable under this obituary.

Evelyn Marie Moser was born on September 1, 1921, in Wilmot, SD.  She was the daughter of John and Marie (Larson) Larsen.  She grew up in the Wilmot area and attended country school through the eighth grade.  She was united in marriage with Myron Moser on June 10, 1951, in Milbank, SD.  They were blessed with five children: Keith, Meredith, Terry, Julanne, and Tamara.

They lived and farmed south east of Milbank. Myron passed away on May 23, 1964.  Evelyn and her four children had their house moved into Milbank.  Evelyn raised her children while also working for many years as a cook for the Milbank Public Schools.

Evelyn was a member of American Lutheran Church in Milbank.  She enjoyed sewing, word find books, and music.  She loved her “stories” (soap opera) that she faithfully watched daily – even recording it so she could watch it after work.  Most importantly, Evelyn loved and adored her grandchildren, great-grandchildren, and great-great-grandchildren.

Left to cherish her memory are her two daughters: Julanne (Doug) Hyatt of Highmore, SD; and Tamara (Kevin) Schuelke of Milbank, SD; nine grandchildren; 15 great-grandchildren; five great-great-grandchildren (with another one due in February); two sisters-in-law: Marion Larsen of Ortonville, MN; and Jan Olson of Pensacola, FL.  She was preceded in death by her parent: John and Marie; husband, Myron; three sons: Keith, Meredith, and Terry; one grandson, Justin Hyatt; her father-in-law and mother-in-law: Reuben and Ida Moser; and all her siblings.