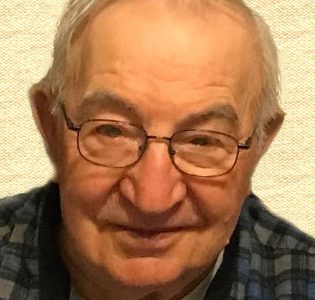 Armin Rudolph Pinkert was born on October 15,1928, to Rudolph and Lydia (Dahme) Pinkert, at the family farm in Alban Township, rural Big Stone City, SD. Armin raised his family and lived his whole life in the house in which he was born.

He attended Alban School #1. While in high school, Armin was on the student council and was captain of the football team. He graduated from Ortonville High School in 1947. After graduation he helped his father on the farm. He received the National FFA American Farmer degree in 1951.  In 1953 he was named Outstanding Young Farmer for the Ortonville, MN area.

Armin married Bernice Winter on December 3, 1949, at First English Lutheran Church in Ortonville, MN.  Armin and Bea moved to the farm, eventually purchasing it from his parents, and resided there for over 72 years. They were blessed with five sons: David, James, Neil, Gene and Jeff. Armin was a 4-H leader for 20 years and taught Sunday school at St. John’s Lutheran Church. He was a director and president of Grant County D.H.I.A. and sold Funk’s and Golden Harvest seed corn.

Armin enjoyed watching the crops grow and taking care of dairy cattle. In 1983 Armin, Neil and Gene incorporated the farm into Rainbow Holsteins, Inc.  Armin was involved in the daily operation of the dairy until 2012, when the cows were sold. In later years, he enjoyed gardening and taking care of the yard. He continued to help around the farm, driving tractor when needed, especially at harvest time. Armin liked to drive his great-grandkids around the farm on his golf cart when they came to visit.

Armin and Bea relished their travels to the warm climates of Florida, Arizona, California, Mexico and Hawaii.  He enjoyed watching the Minnesota Twins and the Minnesota Vikings.

He was preceded in death by his parents; sons: David and James; brothers: Reuben, Harry and Paul; and sister, Harriet Logue.