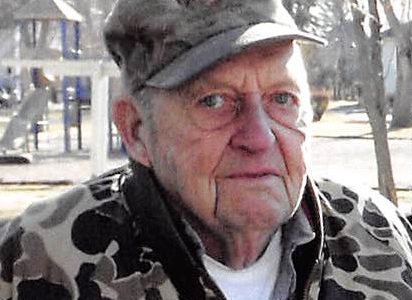 Funeral services will be held on Monday, January 4, 2021, at 10:30 a.m. at Emanuel Lutheran Church in Milbank. Visitation will be held on Sunday, January 3, from 1:00 p.m. until 3:00 p.m. at Mundwiler Funeral Home and will continue one hour prior to the service at the church on Monday. Rev. Timothy Koch will officiate, and interment will be at Milbank City Cemetery.

In 1950, Gene enlisted in the United States Navy and was stationed at the US Naval Reserve Base in Orange, TX. He went on to serve on the USS Lindenwald (LSD-6) which had duties on the Atlantic Ocean. Gene was honorably discharged from the Navy in 1954.

On January 21, 1953, Gene was united in marriage with Lois DeJong in Milbank, SD. To this union, seven children were born: Todd, Lonnie, Gail, Kerry, Kip, Lew, and Leigh. Gene returned to the Milbank area after his service in the Navy to help his father on the family farm. They raised Angus cattle and hogs. Gene also visited the sale barns and helped other farmers with their buying and selling of livestock. He was part owner of Ol’ Mill Meats in Milbank.

When Gene slowed down with his cattle, pigs and grain farming, he raised goats and chickens. He also raised an occasional litter of puppies. Gene had a large garden that he took great pride in. He took trips for many years West River to do some hunting. Gene had his daily coffee time that began early every morning where he and his friends would discuss farming, the weather, and any other issue that needed to be discussed for that day. He was a member of the Grant County VFW Post 3486 and a member of Emanuel Lutheran Church in Milbank. Gene also served as the vice president of South Dakota Angus Breeders.