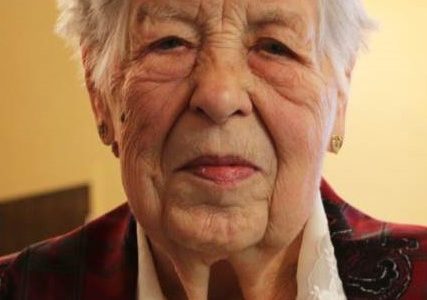 Funeral services will be held on Monday, January 18, 2021, at 11:00 a.m. at the Mundwiler Funeral Home Chapel in Milbank. Visitation will be held on Sunday, January 17, from 5:00 p.m. to 7:00 p.m. at the funeral home and will continue one hour prior to the service on Monday. Pastor Melanie Reiners will officiate, and interment will take place at Milbank City Cemetery.

Mary Arminda DeWilde was born on January 19, 1921, in Twin Brooks, SD to Peter and Minda (Tillett) DeWilde. She grew up on the family farm with her siblings, graduated from Milbank High School, and continued her education at Aberdeen Normal School (now Northern State College) earning her teaching degree.

Mary married her best friend, Ralph “Scotty” Scott on August 31, 1949. The couple were life-long residents of Milbank and passionate about their community.

Following her six weeks of student teaching, Mary began her career as an educator at a country school outside of Milbank in 1940. She taught for two years before transferring to Corona, SD. Nine years later, she was convinced to take a job and relocate to Milbank where she taught until she retired in 1980. Twice named Milbank’s Teacher of the Year, Mary was passionate about her students and rarely forgot a name or face of a student who passed through her kindergarten classroom.

Her love for children continued outside of the classroom as a 4-H leader for 25 years. She was also active in the Sewing Club, Excelsior Study Club, SDEA, Alpha Delta Kappa, Grant County Historical Society, Hospital Auxiliary, and the Milbank Retired Teachers. Mary proudly held office in many of these organizations and never missed an opportunity to continue her own learning. Mary was also an avid reader, reading thousands of books she checked out six at a time from the library.

Mary and Scotty were active in the Parkview Methodist Church where Mary was a part of many Bible Studies. Mary’s love for God was evident in her life and her words of wisdom to others “Go to church, learn about God, and have respect for all people.”

Her love for education led her to fund the Mary and Ralph Scott Scholarship providing a yearly award to a future teacher through the Milbank Education Foundation. Donations may be made to this fund in Mary’s memory.