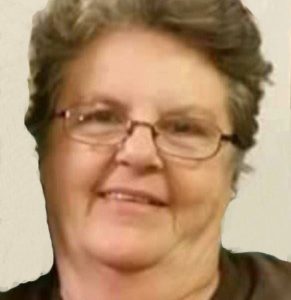 While maintaining social distancing guidelines, we are now able to gather for services. The use of face masks by attendees is recommended.  For those who prefer or require continued precautions, webcasting and livestreaming will be available at the bottom of this page.

Patsy Jane (Kraai) Pies was born on October 17, 1954, in Webster, SD, to Henry and Goldie (Miller) Kraai. She attended school in the Webster area. Patsy and her family lived in Andover, SD, moved to Motley, MN, and settled back in Andover, SD.

On November 27, 1971, Patsy was united in marriage with Leon Allan Pies. The two were blessed with three children: Cindy, Cathy, and Randy. They lived in Watertown, SD, until Leon was transferred with his job at Old Home Bakery to Rapid City, SD, in 1985. In 1993, Leon was transferred to South Sioux City, NE, and the family settled in Hubbard, NE.

Patsy was a hard worker: she made her home and raised three children along with working outside her household. In her early years, she worked as a CNA at the hospital in Watertown, SD, and also did home childcare. When the family lived in Rapid City, Patsy worked retail at Sioux Pottery and at Work Warehouse as well as home childcare.

Patsy was an active member of Salem Lutheran Church in Dakota City, NE. She enjoyed baking, fishing, and visiting with her friends and family. Most of all, Patsy loved spoiling her grandchildren.