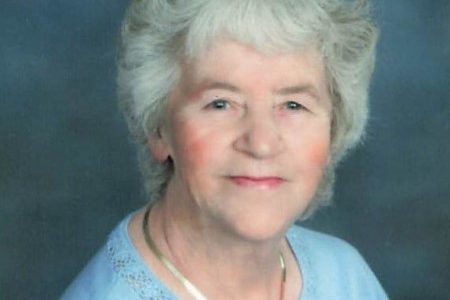 Mass of Christian Burial will be held on Friday, February 12, at 11:00 a.m. at St. Lawrence Catholic Church in Milbank. Father Gary DeRouchey will celebrate the Mass.  Visitation will be at the church on Thursday, beginning at 5:00 p.m.  A prayer vigil will be held at 7:00 p.m. and visitation will continue on Friday morning, one hour prior to the Mass.  Burial will be St. Lawrence Catholic Cemetery.

Mary Lou and Eugene lived a short time in Milbank before settling in Twin Brooks.  They were blessed with eight children: Michael, Karla, Nancy, Steve, Linda, Lori, Darcy, and Harold.  Mary Lou was a loving and devoted wife and mother.  She raised her eight children to know the value of hard work, love, and faith.  She worked several jobs outside her home including working at Clarkdale Nursery; she worked as a waitress and also worked for 19 years at Big Stone Canning Factory.

Mary Lou loved and cherished her family.  She so looked forward to when all eight children would gather for weekly family card games.  Her grandchildren meant the world to her. She was always their proudest (and loudest) fan in the stands! Mary Lou was an avid reader and read many books.  She enjoyed watching the old Westerns on television.

Mary Lou was a 30-year member of the VFW Ladies Auxiliary. She was a faithful member of St. Lawrence Catholic Church and looked forward to daily Mass while living in the care center.  She especially loved Blue Cloud Abbey and attended Mass and the activities whenever she could.

Eugene passed away on August 28, 2006. For the past eight years Mary Lou has resided at St. William’s Care Center.