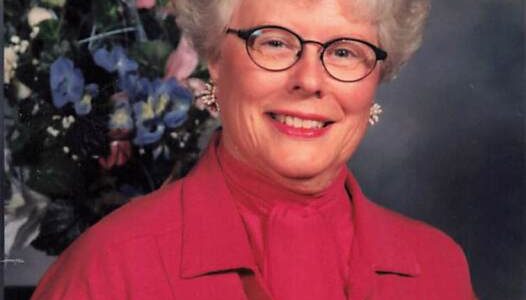 Funeral services will be held on Monday, February 22, 2021, at 2:00 p.m. at Central United Methodist Church in Milbank.  Rev. Dr. DeVern Schwenn and Rev. Melanie Reiners will officiate.  Visitation will be held on Sunday from 5:00 p.m. until 7:00 p.m. at Mundwiler Funeral Home.Visitation will continue at the church on Monday, one hour prior to the service. Burial will be in the Milbank City Cemetery.

On February 13, 2021, Janet May Mikkelson Grorud returned to the loving arms of her Savior, Jesus Christ.

She was the daughter of L.M. and Cornelia (Wilson) Davis, born September 18, 1936, in Milbank, S.D.  She attended school in Milbank where she graduated from high school.

She was a member of Central United Methodist Church where she served in various capacities which included singing in the Gospel Choir for many years.  Some other activities included Extension Club, Brownie Scout leader, Community Thrift Shop volunteer and helping where needed.

She and Bud enjoyed living full time at their lake home during their retirement years.  At the lake, Jan was known to her grandsons and their friends as the “malted milk Grandma”.

She always had time for her loving family and friends and gladly shared her joy of flowers, rocks, birds, and nature.  She retired in 1998 after 30 years at the Conroy Eye Care.

Preceding her in death was her husband of 48 years, Bud; her parents; an infant sister; and her two brothers: Donald and Darrell Davis.

In lieu of flowers, Jan’s family suggests memorials be given to the Milbank Education Foundation.