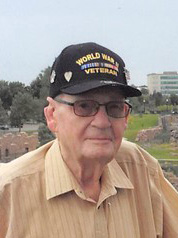 Funeral services will be held on Tuesday, February 23, 2021, at 10:30 a.m. at Christ Episcopal Church in Milbank, SD. Visitation will be held on Monday, February 22, 2021, from 4:00 p.m. to 6:00 p.m. at Mundwiler Funeral Home in Milbank and will continue one hour prior to the service on Tuesday at the church. The committal will take place at Milbank City Cemetery immediately following the funeral service.

While maintaining social distancing guidelines, we are now able to gather for services. The use of face masks by attendees is required.  For those who prefer or require continued precautions, webcasting and livestreaming will be available on the Mundwiler Funeral Home site.

Clifford Leroy Dexter was born on May 14, 1924, to Daisy Struck on his grandparents’ farm near Correll, MN. He attended school at District #53 (known as the Dexter School) through sixth grade. Clifford went on to attend school in Correll and graduated in 1942.

When Clifford turned 18, he had to register for the World War II draft. After working on a couple of farms, he decided to enlist in the United States Marine Corps in December of 1944. Clifford attended Basic Training at Paris Island, SC, then attended his infantry training at Camp Lejeune, NC. He was transferred to San Diego, CA, for his sea-going training which meant that he would be stationed abord a ship. Clifford went to Hawaii and waited to be assigned to a ship. He was assigned to the battleship, USS Tennessee, near the island of Okinawa, Japan. Clifford was part of the Marine Company that secured the Waukenaura portion of Japan.

On his way back to the United States, Clifford’s Marine Company went to Yokohama Bay and had liberty in Tokyo, Singapore, Columbo Ceylon, and Cape Town, before finally docking in the Philadelphia Navel Yard. Clifford was transferred to Portsmouth, VA, where he worked in the First Sargent’s office until he was honorably discharged on August 16, 1946. In the early part of March of 1946, Clifford was granted a ten-day leave and on March 4, 1946, he was united in marriage with Lillian Pratt from Ortonville, MN. They would have been married 75 years on March 4, 2021.

Clifford did farm work for a couple years after his discharge from the Marines. In 1948, Clifford, Lillian, and son Ronald moved to Milbank, and Clifford began his career in sales with Dakota Granite Co. His career spanned over four decades and in 1990 he retired, helping out part time for several more years. Clifford enjoyed music, dancing, billiards, pheasant hunting, and woodworking, especially making clocks.

He was preceded in death by his mother, Daisy; and son, Ronald, who lost his life in Vietnam in 1966.