James “Jim” Remund, age 96, of Milbank, SD, passed away on March 6, 2021, at Avantara-Milbank. Funeral services will be held on Wednesday, March... 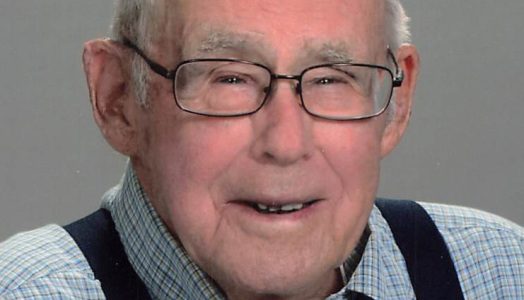 Funeral services will be held on Wednesday, March 10, 2021, at 10:30 a.m. at Emanuel Lutheran Church in Milbank. Visitation will be held on Tuesday, March 9, from 5:00 p.m. to 8:00 p.m. at Mundwiler Funeral Home in Milbank and will continue one hour prior to the service on Wednesday. Pastor Tim Koch will officiate, and burial will take place at Milbank City Cemetery.

James Rex Remund was born in Wilmot, SD, on July 22, 1924, at 10:00 a.m. to Oscar and Tina (Quade) Remund. He attended rural Roosevelt Grade School Lake District #5 in Roberts County in South Dakota. James graduated in 1938 and went to work on the family farm.

On December 9, 1945, Jim was united in marriage with Evelyn Tietjen. Together, they raised three children: Steve, Janet, and Jamie. They farmed in rural Roberts County until they moved to Milbank in 1972. After Evelyn’s passing in 1999, Jim married Nancy Christenson in 2001.

Jim was a hard worker all his life. He started farming north of Milbank near Hartford Beach. He later worked with Arlo Dockter building homes in Milbank. Jim also worked construction taking part in building the Big Stone Power Plant. When that building was completed, he worked for the Cargill Elevator for a number of years. Upon retirement, he worked seasonally for the O’Brien family during planting in the spring and harvest in the fall.

Jim was a man of quick wit and always greeted anyone with a smile. He loved his family especially his children, grandchildren, and great-grandchildren. Jim enjoyed going south to Texas for the winter. He was so good at playing pool that his fellow winter Texans started calling him, “South Dakota Fats” after the legendary, Minnesota Fats. Jim and Evelyn went to Texas every winter and he continued going to Texas after Evelyn’s passing. He pulled his camper there and made his last trip when he was 90 years old. He had so many friends from around the country because of his traveling. Jim also loved deer hunting and rarely missed a season. He was an excellent shot!

Jim was preceded in death by his parents; wives: Evelyn and Nancy; and sisters: Dorothy Thymian and Ethel Willett.