Jamey Jurgens, age 70, of Milbank, passed away on March 8, 2021. A prayer service for immediate family members will be held on Thursday, March 11,... 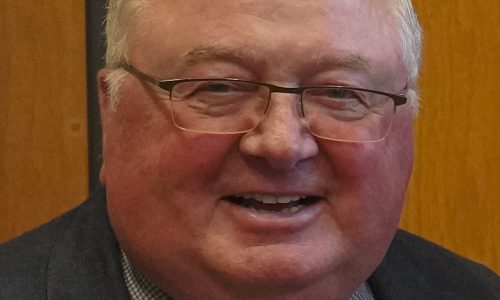 A prayer service for immediate family members will be held on Thursday, March 11, at 10:30 a.m. Father Gary DeRoucehy will officiate. This service will be livestreamed and recorded and viewable below this obituary.  A Mass and public celebration will be held at a later date. Burial will be at St. Lawrence Catholic Cemetery.

James “Jamey” Walter Jurgens was born on December 16, 1950, in Milbank, SD, to James “Jim” and Betty (Allen) Jurgens.  Jamey graduated from Wilmot High School in 1969. Listeners of Jamey’s stories of high school basketball or football prowess might be surprised to learn he did not pursue a life in professional sports, but in fact he chose a more traditional path and attended Northern State College in Aberdeen, SD and received a degree in Business Administration.

On April 15, 1972, Jamey married his college sweetheart, Cheryl Sando, in Rosholt, SD.  Two children, Donny and Val, were born in Aberdeen. In 1980, Jamey took the Manager position at Lola’s Red Owl in Milbank and the family relocated and daughter Sophia was born shortly thereafter. In 1981 the Jurgens family landed in the home all children grew up in and remains as ‘Home’ today.

Jamey spent over 20 years managing grocery stores in Aberdeen and Milbank – Kessler’s in Aberdeen, and Lola’s Red Owl and Bill’s SuperValu here in Milbank. Through those positions, he gave hundreds of people their first job – bagging groceries or being a cashier, among other positions. Hundreds of individuals spread over generations comprising today’s area work force can trace their work ethic to Jamey; chances are if your first job was given to you by Jamey Jurgens, your co-workers today would say you have a “good work ethic”. Jamey’s spirit lives on in you. He also worked as a salesman for Jurgens & Sons Implement and Dakota Granite Company and fostered relationships both locally and across the nation in the context of those positions. Jamey’s children, and likely many others, have many memories of him incorporating his associations with people of all parts of the country to the current topics of conversation, often encouraging us to “stop by and say Hi” when our travels might come into the vicinity of someone he had met – even if his connection dated decades ago, and we ourselves had never met these people. His work life was reinvented once more when he became a financial advisor for Ameriprise, a position he held for over 19 years until his retirement in 2015. His Ameriprise office on Main Street in Milbank became his home base for frequent visits to other businesses in Milbank, both on Main Street and beyond. And over the years, it became a home base to many others as well. His Friday afternoon “Safety Meeting” became a treasured tradition where most world problems were solved, complete with good friends, coffee (some), whiskey (more than some), belly laughs (many) and ridiculously tall tales (innumerable).

Jamey was a civic-minded man, giving his time and talents to better his community. He was an Eagle Scout in his youth and Cub Scout Pack Leader for his son Donny’s pack. He served on the Chamber of Commerce Board of Directors and was Co-Chairman for the Retail Committee.  He was a decades-long active member within the Kiwanis Club serving as President, Secretary and Treasurer, as well as on the Board of Directors.  He served as President of the Wilmot Alumni Association and was a Representative for the Dakota Leaders Conference.  He was an active member of St. Lawrence Catholic Church as a lector and eucharistic minister throughout his time in Milbank.

Jamey was an avid fisherman and hunter, spending many long days on Big Stone Lake pulling up perch, or rowing the duck boat out to set up decoys with Donny, or driving to various locations for pheasants or deer. During the last couple decades of his life, he savored fishing above all other outdoor activities, especially with his grandkids and nephews. Continuing a Jurgens tradition, he always had an impressive garden with plenty of everything to share with whoever asked.  Jamey and Cheryl enjoyed traveling with friends as often as possible. However, far and away his favorite activity was visiting his children and grandchildren to see the next hockey game, robotics meet, dance recital, swim meet or just hang out and play cards. Jamey’s favorite holiday was the family’s annual “Lefse Party” where all the grandkids made lefse and decorated Christmas cookies with Grandpa.

He was well known in the community for his amazing stories, infectious smile and all-around positive attitude.  Above all else, he loved telling anyone who would listen about his grandkids and their accomplishments – many of which were probably even true.

Jamey died of COVID in St. Cloud, MN, where his son, Don, practices. COVID for Jamey was swift and merciless despite all medical efforts; thankfully he was comfortable at the end and Cheryl and Don were able to be with him in his final moments. He passed away in the early hours of March 8th, 2021 at the age of 70.  He was grateful to everyone who cared for him and his family both within the hospital and out in the community. Because of the current COVID pandemic, and to respect Jamey’s expressed wishes there will not be a public service at this time. However, his family and friends know if there is a man whose life deserves a large celebratory gathering, it is Jamey Jurgens, and have intention of organizing a celebration of his life this Summer in Milbank, COVID permitting.