Roger Adolph Heller, age 89, of Olivia, MN went home to Jesus surrounded by loved ones on April 1, 2021 after having been diagnosed... 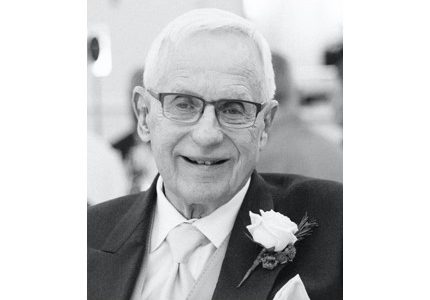 Roger Adolph Heller, age 89, of Olivia, MN went home to Jesus surrounded by loved ones on April 1, 2021 after having been diagnosed with a rare blood disorder (amyloidosis) in September, 2020.   A service will be held on July 10, 2021 at 11:00 a.m. at Zion Lutheran Church in Olivia with Pastor Isaiah Horn officiating.  Arrangements are with Dirks-Blem Funeral Service of Olivia.

Roger was born to Adolph and Esther (Beyer) Heller on August 3, 1931 near Revillo, SD.  Roger took over the running of his family’s farm when he was 13 years old and his father fell ill, and continued to be involved in agriculture to the end of his life.

Roger graduated from Revillo High School in 1949 and went on to receive a Master’s in Agricultural Science from South Dakota State University in 1954.  He married Virchella Thorkelson the same year. He took a position as a Vo-Ag instructor in New Effington, SD and a year later they moved to Danube, MN where Roger taught Vo-Ag until 1962. Roger went on to work at Trojan Seed Company as an Agronomist, and in 1963 Roger and Virch moved to Olivia where they started their farm management company, North Central Ag Services which Roger ran until 2006. Not content to retire in his 70s, Roger continued to manage farms and sell real estate for 15 more years.

Roger married Arlene Weis in 2006 and they bought a winter home in Arizona where they enjoyed spending time and discovered country dancing. Roger loved spending time with family whether in Olivia, Arizona, the family cabin on Big Stone Lake, SD, or traveling internationally. Over the years he loved to golf, hunt, play cards and study history.

Roger contributed to his community for years. He was involved in bringing Lakeland Bean Company (now ADM) to Olivia and was one of the founders of the American State Bank of Olivia (now F & M Bank).

He served on many boards, including the American State Bank of Olivia, Greater Olivia Chamber of Commerce, and the Olivia Hospital Foundation Board.  Roger was a lifelong and very active member of the Olivia Lion’s Club.

Roger was a devout Christian and was very active at Zion Lutheran Church in Olivia, teaching Sunday School and serving on many church boards and committees.

In addition to managing and marketing farms, Roger loved farming itself. He bought his first piece of farmland north of Danube in 1963 and started his own farming operation. Roger was an early investor in the Southern Minnesota Beet Sugar Cooperative, and in 1977 he partnered with the Blake   Schroeder family who ran the expanding farm operation and they farmed together for over 40 years. Well into his 80’s Roger was out on the tractor, taking the night shift and driving his family crazy with worry.

Roger loved being a grandfather and found enormous joy spending time with his granddaughter, Chloe, whom he had the honor to baptize into the Christian faith shortly after her birth. Roger was delighted to have 2 step-children and five step-grandchildren all living nearby in Minnesota.

Blessed Be His Memory. Dirks-Blem Funeral Service, Olivia, Minnesota is in charge of the arrangements.