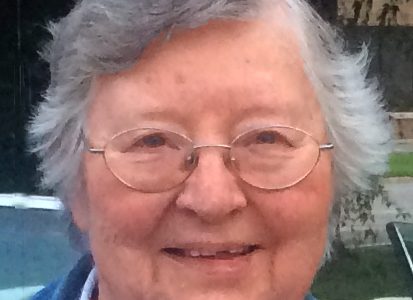 Violet Griepp, age 93, of Faribault, MN, formerly of Big Stone City, SD, passed away on Monday, April 5, 2021, following Easter Sunday at Essentia Health – St. Mary’s Medical Center in Duluth, MN.  She peacefully slept her way to heaven, with two of her daughters by her side.

Due to the pandemic, a private family funeral will be held in May at Abiding Faith Lutheran Church in Ortonville, MN, with Pastor Richard Larson officiating.  A celebration of life will be held August 14, also at Abiding Faith.  Casket bearers will be her granddaughters; Gwendolyn Cogley, Rebecca Ivie, Tania Bjerke, Tiffany Perry, Teresa McAlpine, Tarsha Storey, and Aurora Kettering.

Violet Ruth Claudy was born in Revillo, SD, on December 10, 1927, the cherished only child to Oscar Swaney Claudy and Anna (Davis) Claudy. She was raised in rural Grant County attending country schools and graduated from Revillo High School in 1945 at age 17. Due to a shortage of teachers, her superintendent persuaded her to teach that fall at Drywood Lake #3, with 17 students. Through this, she met the man who would become the love of her life, Edwin Griepp. She enjoyed teaching, so she took a six-week training course the following summer. She continued teaching in rural schools in Roberts, Grant, and Deuel Counties ending with Alto School in 1965. Violet furthered her own education attending Northern State College every summer, finally achieving her master’s degree in 1973. She taught in the New Effington/Claire City system for 17 years with seven of those years as principal. She moved to the Big Stone School in the fall of 1978 as principal and teacher, retiring in 1990 after 38 years of teaching.

Violet and Edwin were united in marriage on May 14, 1949, at the Evangelical United Brethren Church in Revillo. They bought a combine and went south with Edwin’s best friend, Howard Novstrop, to custom combine following the harvest north. Violet went along, serving as cook. Violet and Edwin acquired land next to his parents’ farm in the mid-1950s, which they sold in 1970. They bought an acreage near Big Stone City and remained there until December 2015, when they moved to Faribault, MN, to be near their daughter, Anna, and family.

Violet was a member of the American Legion Auxiliary, Better Business Opportunity, and other organizations designed to help small farmers and businesses. She also taught adult literacy programs. She loved quilting with her friends at Abiding Faith, gardening, reading, sewing, and traveling. She had a life-long love of animals.

She was preceded in death by her beloved husband, Edwin; parents: Oscar and Anna; infant daughters: Gwendoline Gail and Laura Ruth.