Charles Edward Layher earned his eternal rest on May 11, 2021, at St. Williams Care Center in Milbank. A Mass of Christian Burial will... 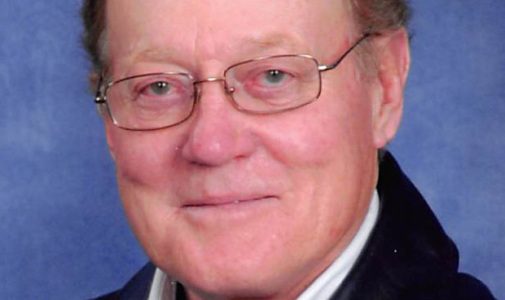 Charles Edward Layher earned his eternal rest on May 11, 2021, at St. Williams Care Center in Milbank.

A Mass of Christian Burial will be held on Wednesday, May 19, 2021, at 11:00 a.m. at St. Lawrence Catholic Church in Milbank. Visitation will be held on Tuesday, May 18, 2021, from 5:00 p.m. to 7:00 p.m. at Mundwiler Funeral Home in Milbank and will continue one hour prior to the service at the church on Wednesday. Fr. Gary DeRouchey will celebrate the Mass and burial will take place at St. Lawrence Catholic Cemetery. Military honors will be provided by American Legion-Birch Miller Post #9.

While maintaining social distancing guidelines, we are now able to gather for services. The use of face masks by attendees is recommended.  For those who prefer or require continued precautions, webcasting and livestreaming will be available at the bottom of this page.

Charles was a faithful member of St. Lawrence Catholic Church for 60 years. He graduated from Milbank High School in 1965. During his school years, he was a member of the Grant Center Go Getters 4-H Club. He loved showing his Jersey cows. His dairy heifer earned reserved senior yearling at the State Fair in 1963. He passed his love of Jersey cows onto his grandchildren who have continued his passion of showing Jerseys in the Grant County 4-H program.

After graduating from high school, he worked with his dad on the family farm for a few years. In 1971, he started to work at Cold Springs Granite as a saw operator. He was very proud of the fact that he quarried stone for the WWII memorial in Washington, DC. Whenever he saw “carnelian” granite which is quarried at the Milbank quarry, he would point out the seams or a blemish in the stone to his wife or say “that is a good stone”. After working for Cold Spring for 37 years, he began another career of driving for Community Transit in Milbank. He loved this job! Transporting the kids to school or daycare and the ladies to the grocery store and their hair appointments were all part of his work day. One day, Karen saw him walking one of his “ladies” from her apartment to the bus. She had her arm through his and with her other hand she was patting his arm. They were just chatting away. Karen just smiled and thought “Yes, that’s my Charles”. We hope they have a bus service in Heaven so Charles can continue driving his friends around.

His other “family” was the 740th Transportation Company. He joined the National Guard and completed basic training and AIT at Fort Leonard Wood, MI. He looked forward to their annual training exercises spent at Camp Rapid, Camp Riley, Korea, and Germany. He was called to active duty for Operation Desert Storm and Operation Iraqi Freedom. Many truck miles were logged hauling across the desert sands. He never complained about the heat or the winds of the desert. Charles was an early riser and was always ready for breakfast. Hence the phase, “Ready to Eat”. If you weren’t at least 20 minutes early, you were late in his book. He retired at the rank of E-7 after 32 years and 9 months of service. He continued his service work and joined the Birch Miller Post #9 American Legion. He served as Commander of the post for four years.

Charles loved horses and cats (even though he would say, “I hate cats”). He was active in the Whetstone Valley Rodeo Association, the Tri-State Horsemen Association, and the WVRA Drill Team. As a family, they enjoyed trail riding, horse shows, rodeos, and riding in parades. Charles took a study course on horse shoeing and began trimming and shoeing horses in the evenings or weekends for friends and the family horses. His daughter and granddaughters continue to show horses and his son learned to trim and shoe from his dad.

Charles was quiet, hardworking, and a man of service. His health struggles began when he was 70 years old. Again, he never complained and was always grateful for the doctors, nurses, and staff who cared for him. Please and thank you were always part of his vocabulary. His wife did laugh when he told her they pushed his wheelchair down to the dining room at St. Williams like it was a race.

While Charles left his family much sooner than they wanted, they are at peace. Their faith gives them assurance that he is in Heaven, free of pain and reunited with family. They are sure his grandson, Tanner met him at the gates. Charles is now with Our Lord, Jesus Christ, and they will be together again in glory.

Preceding him in death was his grandson, Tanner Schwagel; his parents; father and mother-in-law: Emery and Helen Anderson; brother-in-law, Irv Axlund; and niece, Maria Miller.