sports-featured1326
The Milbank 14U Junior Teeners added to their now six-game winning streak by sweeping Sisseton in a double header on Tuesday, June 29, at... 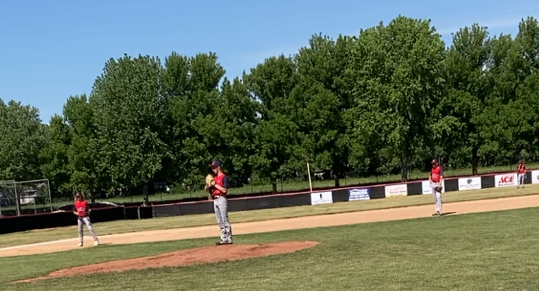 The Milbank 14U Junior Teeners added to their now six-game winning streak by sweeping Sisseton in a double header on Tuesday, June 29, at Pribyl Park. Milbank defeated Sisseton 12-2 in Game One and 11-4 in Game Two.

In Game One, Nollen Sheely toed the rubber for the locals. He pitched all four innings and struck out three batters to earn the win on the mound. Milbank’s nine-run inning in the bottom of the second sealed their victory.
Gage Anderson led Milbank’s offense with two hits and three RBIs. Josh Pederson, Joe Schulte, Reese Rabe, and Daniel Shelstad contributed one hit each to the team total of six.

In Game Two, Anderson took the bump for the first start of his career. He pitched three innings enroute to the win on the mound. He allowed only four runs and struck out four batters along the way.

Jackson Hausauer relieved him in the top of the fourth and finished the game. Hausauer did not allow a run and struck out three batters in just two short innings of work. Milbank’s offense was led by Anderson. He recorded three hits and knocked in one run. Schulte blasted a three-run homer inside the park and added a RBI triple. The 14U Junior Teeners’ season record stands at 11-10 with just two weeks remaining in the regular season.