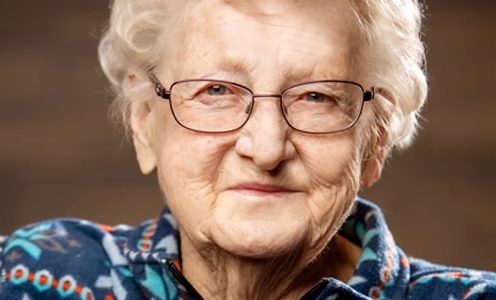 Visitation will be on Wednesday, July 14th from 5-7 PM with a prayer service at 7:00 at Elim Evangelical Mission Church in Stockholm, SD.

Burial will be in the Evergreen Cemetery by Stockholm, SD.

Arlene M. Fields was born on May 26, 1931 in Mobridge, SD to Robert Sr and Hannah Pekelder. She grew up in the Mobridge/Glenham and Wakapala area. She started school at Wayside School through 2nd grade.  They moved back to the Strandburg/Stockholm area and attended country school, Sunnybrook Stockholm #3 through 8th grade when the school was struck by lightning and burnt to the ground. Arlene then attended and graduated from Strandburg School in 1950.

Arlene Pekelder married Robert Fields on November 6, 1953 at the First United Methodist Church in Watertown, SD and was later blessed with 2 children, Merlin and Barbara. The couple had been married 67 years!  Arlene and Bob farmed near Stockholm for around 45 years.  Arlene was a Member of the Elim Evangelical Covenant Church for many years.

Arlene was a devoted mother and wife, she worked wherever she was needed, if it was doing farm work, taking care of the household chores or spending time with her grandchildren and great grandchildren.

She loved going on bus trips and going to the South Dakota State Fair.  Her 9 grandchildren and 18 great-grandchildren could always count on grandma being at their events whether it was school, sports, 4-H or church.

Arlene made her church a big part of her life and served it with joy.  She was part of the Strandburg School class reunion committee and looked forward to seeing old classmates. Arlene also served on the Stockholm election board for many years and took her job very serious. She was a member of the American Legion Auxiliary for 50 years; she was always there to lend a hand when needed. She was an avid gardener and would can 100s of pints of her work, along with enjoying her flowers.

She was preceded in death by her parents Robert and Hannah Pekelder, her husband Robert; her brother, Harvey Pekelder, brother-in-law Warren Larson and sister-in-law Sharlyn Pekelder.