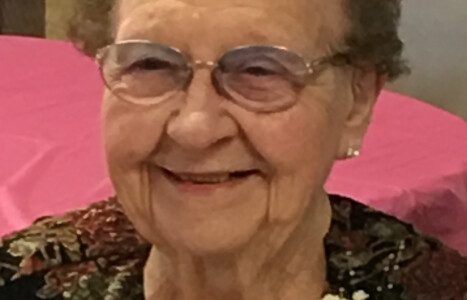 Funeral services will be held on Friday, July 23, 2021, at 11:00 a.m. at Mundwiler Funeral Home in Milbank. Rev. Justin Neugebauer will officiate. Visitation will be held at the funeral home on Thursday, from 5:00 p.m. until 7:00 p.m. and continue on Friday, one hour prior to the service.  Burial will be at Milbank City Cemetery.

Wauneta Theresia Bunting was born on August 20, 1918, in Grant County, SD.  She was the daughter of Ernest Gust Bunting and Florence Emma LaLond Bunting. Wauneta attended school in Grant County and graduated from Revillo High School with the Class of 1937.

Wauneta was united in marriage with Aubery Schaffer on June 25, 1937.  They were blessed with three children: Donna, William, and Douglas. Aubery passed away in 1965.  Wauneta married Robert Schwandt on September 14, 1970.

Wauneta was a very hardworking woman.  Throughout her career she worked at Hunt’s Grocery Store in Revillo, Riddle’s Jewelry Store, Cloth Corner, and co-managed Community Thrift Store. She was a 60 plus years member of United Congregational Church of Christ in Milbank where she was a choir member, taught Sunday School, and served as church treasurer. She was honored as UCC Woman of the Year in 1999.

Wauneta served her community as a gracious volunteer for the hospital auxiliary (Pink Ladies) and for Meals on Wheels.  She was an honorary member of the VFW Auxiliary. She was a 4-H Club leader and a member of the Half Century Extension Club.

Wauneta was a loving caregiver. She cared for her aunt, Myrtle Bunting, as well as many others. She was always concerned and worried about the safety and well-being of her children and grandchildren.

Left to cherish her memory are her children: Donna Kabeiseman of Watertown, SD; William “Bill” (Rosalie) Schaffer of Revillo, SD; and Douglas (Kathy) Schaffer of Big Stone City, SD; daughter-in-law, Carol Halvorson of Milbank, SD; one sister, Maxine Heiller of Temecula, CA; eight grandchildren; 12 great-grandchildren; two great-great-grandchildren (with one more on the way).  She was preceded in death by her parents; husbands; and brothers and sisters-in-law: Jeff and Iris Bunting; Neill and Marion Bunting, Larry and Virginia Bunting.