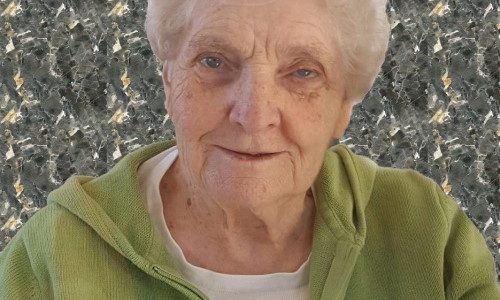 Funeral services will be held on Monday, July 26, at 11:00 a.m. at Countryside Covenant Church, rural LaBolt, SD.  Rev. John DePalma will officiate and burial will be in the LaBolt Cemetery.  Visitation will be held on Sunday, July 25, from 3:00 p.m. until 5:00 p.m. at Mundwiler Funeral Home in Milbank.  Visitation will continue at the church on Monday morning, one hour prior to the service. Casket bearers will be Lucille’s grandchildren.

Lucille Marilyn Nordquist was born on October 16, 1936, in Watertown, SD.  She was the daughter of Egner and Clara (Swanson) Berg. She attended school in LaBolt and graduated from Strandburg High School with the Class of 1954.  Lucille worked at Milbank Mutual Life Insurance Company. She was united in marriage with Donald Nordquist on June 27, 1959, in LaBolt. They were blessed with four children: Cheryl, Kristine, Todd, and Brad.

Lucille lived in the LaBolt area all her life and lived in the same house for 60 years. She stayed at home and raised her children and helped Don at the gas station.  She owned and operated the grocery store in LaBolt from 1977 until 1993. She and Don managed the LaBolt Mini Mall until her retirement.

Lucille was a faithful member of LaBolt Covenant Church, which became Countryside Covenant Church. She enjoyed gardening and playing Rook, especially when she won.

She was preceded in death by her parents; her husband in 2006; three brothers: Leslie, Gordon and Loren; and great-granddaughter, Lucy Leonard.

The Nordquist family is especially grateful for the loving care provided by the staff of St. William’s Care Center.