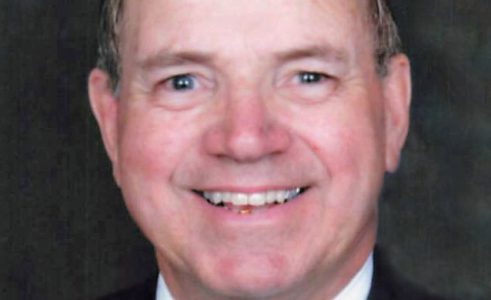 Mass of Christian Burial will be held on Monday, August 2, 2021, at 10:30 a.m. at St. Lawrence Catholic Church in Milbank. Father Gary DeRouchey will celebrate the Mass.

Visitation will be held at the church on Sunday beginning at 5:00 p.m. followed by a prayer vigil at 7:00 p.m. Burial will be at Milbank City Cemetery.

Larry was born in Redwood Falls, MN, on July 13, 1938, to Charlotte and Delancy Cantine. The family moved to Fairmont, MN, where he attended elementary school. When Larry was in seventh grade, the family moved to Truman, MN, where he graduated from high school. He went on to earn a bachelor’s degree in education from Mankato State University. On July 4, 1964, he was united in marriage to Loretta Kampa in Rapid City, SD. After a four-year stint as an air traffic controller in the Air Force he was honorably discharged. Larry and Loretta resided in Minneapolis for a short time.

In 1967, Larry accepted a teaching position with the Milbank school system. He also held a part-time job at Liebe Shoes. After teaching for six years, he went to work for Charles Tobin at Valley Office Supply. In 1980, he purchased the business and named it Valley Office Products, Inc. He never retired.

Larry was a Cub Scout leader, a member of the American Legion, past president of the Chautauqua Concert Association, and president of Milbank Area Community Tennis Association (MACTA). Larry was inducted into the South Dakota Tennis Hall of Fame in 2010.

As a member of St. Lawrence Catholic Church, he belonged to the Knights of Columbus, and participated in the St. Lawrence choir for 51 years, serving as director for most of those years; He especially enjoyed acting as a Eucharistic minister to the homebound and those in nursing homes.

Larry was preceded in death by his parents.