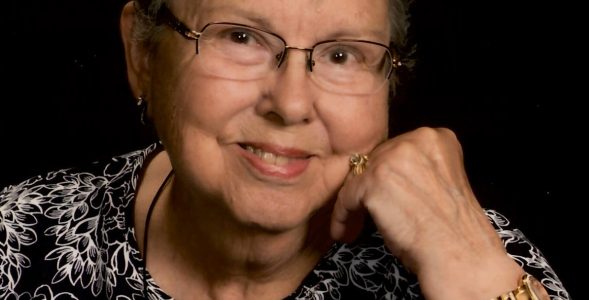 Funeral services will be held on Tuesday, August 3, 2021, at 11:00 a.m. at American Lutheran Church in Milbank. Visitation will be held one hour prior to the service. Burial will take place at Hills of Rest Cemetery in Sioux Falls.

Shirley Rae Brown was born on June 7, 1932, in Inwood, IA, to Raymond and Ethel (Leffler) Brown. She was baptized at Bethel Methodist Church. Shirley graduated high school in 1950. She moved to Sioux Falls, SD, and found a job at a local bank.

On June 5, 1953, Shirley was united in marriage with Dale Skadsen. To this union three children were born. Always a hard worker, Shirley poured herself into the shoe repair business she started with her husband, Dale. They owned and operated Park Ridge Shoe Repair for more than 40 years. Dale passed away on December 27, 1998.

Shirley married her childhood friend, Clayton Olson on March 6, 2010. Together, they made their home in Milbank, SD. They enjoyed spending the winters in New Mexico.

Having faith was important to Shirley. She attended United Methodist Church in Sioux Falls where she was a member of the church choir. In Milbank, Shirley was a member of American Lutheran Church.

Shirley enjoyed traveling, fishing, and going on Caribbean cruises in her younger years. She enjoyed watching Legion Baseball, reading, crochet, and visiting with people. Shirley was a gifted seamstress: making dresses and repairing many garments. She participated in Bible study and rarely missed a Monday get together with her Sioux Falls cardiac rehab friends.

Shirley was preceded in death by her parents; husband, Dale; infant daughter; sisters: Zonita and Opal; and brother, Lloyd.