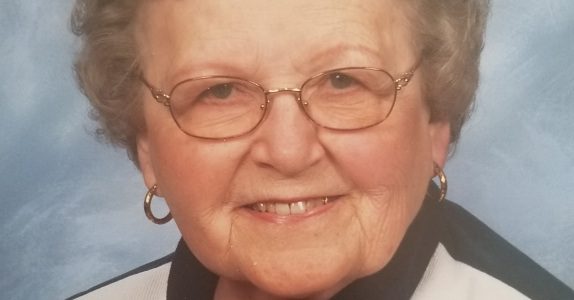 Ruth Leona Walth was born on June 23, 1921, in Freeman, South Dakota, and was the daughter of William and Augusta Ibis.  She grew up during the depression on a farm near Freeman, attended a country school, and graduated from Menno High School in 1938.  Growing up on a farm, she was determined to get an education and earned money as a waitress so that she could go to college.

She graduated from Freeman Junior College where the students elected her Prom Queen. In her first one room school in Zeeland, ND, Ruth had five students all in different grades.  She taught country schools in McPherson County, SD, for three years, and elementary school in Hosmer, SD, and Warner, SD, for two years.  Ruth loved teaching and until her death was still in touch with some of her students.

She was united in marriage to Herb Walth on July 19, 1943, in Ephrata, Washington.  She met Herb when he delivered a telegram to her at the school.  Four days after they were married Herb left to serve in WWII as a control tower operator in Guadalcanal while Ruth worked in the office of a shipbuilding company in Stockton, California.

They made their first home in Warner in 1946, living in the upstairs of the Milwaukee Railroad train station. Herb and Ruth moved to Britton, SD, in 1956 and to Milbank in 1964. Ruth taught herself Morse Code so she could cover for Herb who was the station agent. Ruth worked for the Britton Journal in Britton and was the Koch School secretary in Milbank for 17 years, retiring in 1983.

Ruth was a lifelong member of the American Legion Auxiliary in Warner, and an active member in the Retired Teachers Association and the American Lutheran Church Circle in Milbank.  Despite losing much of her vision she was able to live on her own until she was 97 in independent living at Trail Ridge in Sioux Falls, SD.

Ruth will be remembered for her fabulous cooking, her wisdom, her collection of dolls, her great sense of humor, and for always being a teacher.