Helen Whempner, age 92, of Wilmot, SD, passed away on Monday, September 13, 2021, at her residence of natural causes. Mass of Christian Burial... 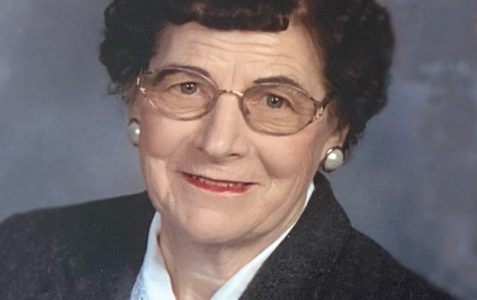 Helen Whempner, age 92, of Wilmot, SD, passed away on Monday, September 13, 2021, at her residence of natural causes.

Mass of Christian Burial will be held on Saturday, September 18, 2021, at 11:00 a.m. at St. Mary’s Catholic Church in Wilmot. Father Gary DeRouchey will celebrate the Mass. Visitation will be held at the church on Friday, beginning at 5:00 p.m. with a prayer vigil at 7:00 p.m. Visitation will continue at the church on Saturday, one hour prior to the Mass. Burial will be in Wilmot City Cemetery.

The service will be livestreamed and recorded and viewable below this obituary.

Helen Marie (Piechowski) Whempner was born on March 23, 1929, in Browns Valley, MN. She was the daughter of Frank and Sophia (Geibel) Piechowski. Helen grew up on the family farm in rural Browns Valley. She attended school through the eighth grade in Traverse County, MN. She graduated from Graceville Catholic School. She worked at the grocery store in Browns Valley.

Helen met Darold Max Whempner at the dances in Browns Valley. She wrote letters to him while he served in the military. She was united in marriage with Darold on June 11, 1957, at St. Anthony’s Catholic Church in Browns Valley, MN.

Helen farmed with her husband in Springdale Township, Roberts County, SD, and raised their five children: Eugene, David, Carolyn, Vernon, and Sharon. She and Darold enjoyed dancing and listening to old time country music. She was a wonderful mother, cherished her grandchildren, and was so proud of their accomplishments.

Helen loved and worked hard in vegetable and flower gardens. She worked hard on the farm and always had meals that she took out to the field.  She canned her harvest and loved to cook for her family. She was “famous” for her date filled cookies and hot chicken salad sandwiches. She also loved a get together with family or friends at Pizza Ranch.

Helen was a faithful member of St. Mary’s Catholic Church. She was a Sunday School teacher and an altar society member. Her grandchildren will treasure the handwritten cards and letters that she sent to them on birthdays and holidays.

She was preceded in death by her parents; her husband; three sisters: infant, Margaret, Beatrice Lewandowski, Patricia Fischer and two brothers: Francis and Leonard Piechowski