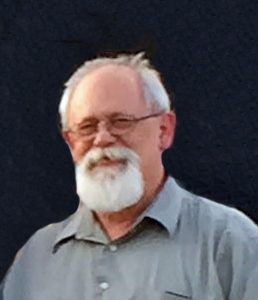 Funeral services will be held on Friday, October 1, 2021, at 10:30 a.m. at Calvary Church in Milbank. Pastor Daniel Lopez will officiate. Visitation will be at the church one hour prior to the service. Burial, with military honors will be at the Milbank City Cemetery.

Mark Edward Spanton was born on January 4, 1955, in Anaconda, MT. He was the son of Owen ad Mary Lou (Harder) Spanton. The family moved to Milbank, SD, and Mark attended Milbank schools. In 1972, he moved to Box Elder, SD, where he earned his GED. He lived in Rapid City, SD, a short time before returning to Milbank and has since resided.

Mark worked various jobs in Milbank, mostly in maintenance. He worked at Alco in maintenance and at United Hardware as a janitor for ten years. He worked for Grant County Review for many years running the paper from the press to delivery. He retired at the age of 62.

In 1979, Mark was united in marriage with Gail Sabin. On July 22, 1986, they were blessed with a daughter, Gina. She grew up in Milbank and graduated from University of South Dakota. Mark was extremely proud of his daughter!

On October 10, 1977, Mark enlisted in the Army National Guard. He was a member of the 740th Transportation Company. He was honorably discharged on April 2, 1982.

Mark was a member of Calvary Assembly of God Church in Milbank. He enjoyed spending time with friends. He was an avid movie fan, especially movies from the 1930’s, 40’s, 50’s and 60’s. He also enjoyed super-hero movies, Star Trek, and Star Wars.

He enjoyed playing acoustic, electric, and bass guitar. He played in the church’s band until his cancer diagnosis. Mark loved to relax and enjoy nature. He enjoyed visiting state parks and picnics with his brother. He loved visiting his grandchildren.

Left to cherish his memory are his daughter, Gina (Roman) Gentry of St. Paul, MN; two grandchildren: Dream Sorrell and Trillion Sorrell; siblings: Cindy Spanton, Julie (Bill)Dwyer, and Jeff Spanton all of Milbank, SD; several nieces and nephews. Mark was preceded in death by his parents.