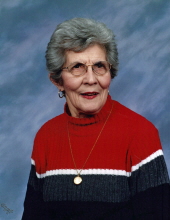 Roberta Jean Foster was born on May 30, 1925 in Winnebago Township, Faribault County, MN to Frank and Hazel (Brown) Hemingway. She was the fourth of eight daughters living on the farm. Not liking chickens, Roberta helped her mother “in the house.” She attended Basey Country School and graduated from Winnebago High School in 1943. Roberta and her mother took the train to Charleston, SC where she married her high school sweetheart, PFC Robert L. Foster on January 14, 1945. Following Bob’s graduation from Mortuary College they moved to Ceylon, MN. In 1953 Bob and Roberta moved to Jasper, MN where they operated Foster Funeral Chapel and Foster Floor Covering. Roberta served as a homemaker, mother of six children and assisted Bob with both businesses. After Bob’s death in 1982, she continued to oversee the operation of the funeral home and floor covering business for several years. Roberta lived independently in her home into 2014 and then at Split Rock Villa Townhomes until the time of her death. On October 4, 2021, she entered the Pipestone County Medical Center in Pipestone and was on hospice care there for a short time before her death on Wednesday, October 6, 2021 at the age of 96 years, four months, and seven days.

Roberta was a long time member of the Jasper United Methodist Church where she played piano for church for many years, retiring from that role at the age of 90. She was also the church choir director, was involved with the Sunday School, and the Ladies Aide. Roberta was a member of the American Legion Auxiliary in Jasper and liked volunteering her time helping with bloodmobile drives. In her spare time Roberta liked to garden. She enjoyed going to ballgames that involved the local schools, and in later years watched all of the various Minnesota sports teams play. She will be remembered for the many cards she sent, gifts she gave, and special cut out cookies made for all of her grandchildren and great-grandchildren. She was a member of the clean plate gang; you couldn’t leave the table until your plate was clean! Her many, many phone conversations and Facebook comments will be remembered and sorely missed.