featured3386
Remember when you were five and got a fire hat from the firemen who visited your school? It’s still a time-honored tradition.During 2021 Fire... 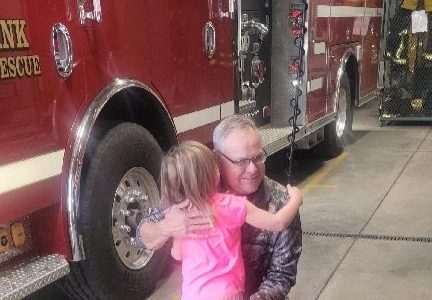 Remember when you were five and got a fire hat from the firemen who visited your school? It’s still a time-honored tradition.
During 2021 Fire Prevention Week from October 3-10, firefighters from the Milbank Fire and Rescue Department handed out the coveted red hats, gave firetruck rides to school, and led fire safety presentations to classes, and conducted evacuation drills.

The firefighters made visits to area schools to talk fire safety to kids in preschool through second grade. Milbank Fire Chief, Kevin Schuelke says, “Fire safety books and materials were provided by the Milbank Fire Department. So, if your child brought home a fire hat it was from your local volunteer firefighters.”

Firefighters chose the week of October 9 for Fire Prevention Week to commemorate the Great Chicago Fire, which began on October 8, 1871. The conflagration burned from October 8-10 and killed nearly 300 people, left 100,000 homeless, and destroyed more than 17,400 structures and roughly 3.3 square miles of the city.

Much is still debated about the cause of the fire. Was it really Mrs. O’Leary’s cow who kicked over a lantern?  But, it is generally agreed, the fire’s spread was aided by the city’s use of wood as its predominant building material.  Around two-thirds of Chicago was constructed of wood at that time. All of the city’s sidewalks and even many of its roads were made of wood. Plus, Chicago was in the midst of a severe drought after receiving only one inch of rain since July 1 that year. The Great Chicago Fire still makes the list of the 10 worst fires in US history.

So, even if you’ve outgrown the red plastic fire hat, don’t forget to take a few minutes to plan your fire escape route, choose an outdoor meeting place, practice a home fire drill, test your alarms — including the batteries — and thank a brave and dedicated fireman.