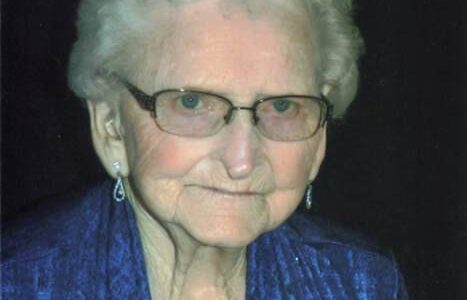 Funeral services will be held on Tuesday, October 19, 2021, at 10:30 a.m. at Living Word Lutheran Church. Visitation will be held on Monday from 5:00 p.m. until 7:00 p.m. at Mundwiler Funeral Home in Milbank. Burial will be in the Milbank City Cemetery.

Ardell Holtquist Barck was born on November 28, 1928, in Grant County, SD. She was the daughter of Bert and Florence Bray Holtquist. Ardell was a life-long resident of Grant County.  She grew up in the Milbank area and attended rural school through the eighth grade. Ardell worked on the family farm and also for various families. She was united in marriage with Lyle Barck on November 9, 1949.

Ardell and Lyle moved to Rapid City, SD, and later to Fairmont, MN. They returned to Grant County and settled in LaBolt. They opened Barck’s Café in 1960, and worked seven days a week! They sold the café in 1965 and moved to Milbank. Ardell worked in the kitchen at Koch School. In 1968, Ardell started painting and finishing woodwork, a career that she enjoyed for over 40 years. After returning, she started making doughnuts for family and friends. When Donna had her rummage sale each year, Ardell would bake doughnuts and bread to sell for three days. She would make 125 to 140 dozen and would sell out every year. Ardell was very particular about her work and took pride in getting it done right! Her daughter, Donna joined her business in 1969.

Ardell loved her grandchildren and great-grandchildren very much and always tried to attend their activities. She enjoyed playing cards, Bingo, and Farkle with her family and her card ladies. She always seemed to win! Ardell and Lyle enjoyed camping and fishing trips.

Ardell moved to St. William’s Care Center in October of 2019. She loved the care given by the sisters, nurses, and all the workers at St. William’s.