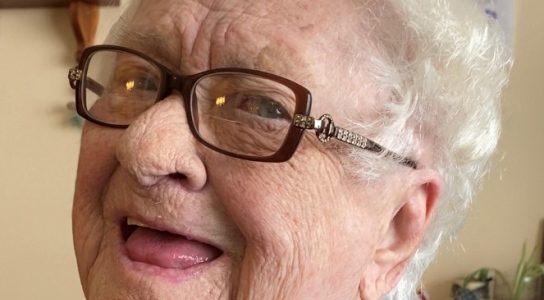 Lorraine Pearl (Gregerson) Hines was born on October 23, 1930, in Karlstad, MN, to Gilmore and Alice (Gunderson) Gregerson. She grew up in Badger, MN. Lorraine was confirmed into the Lutheran Faith at Nannestad Lutheran Church of rural Badger. She attended rural school at District 18 through eighth grade and graduated from Badger High School in 1948.

After graduation, Lorraine attended Teacher’s Training in Thief River Falls, MN, and graduated in 1949. She taught in rural schools for a number of years. In her first year of teaching, Lorraine taught at a country school on Roseau River near the Canadian border until the school flooded. She and her sister, Ruth, had to be taken out of harm’s way by military forces. In 1952, Lorraine moved to Ortonville and taught school for three years at the Hutterite Colony.

In 1955, Lorraine was united in marriage with Erwin “Bud” Wellendorf. Together, they were blessed with two children: LaRae in 1956 and Wayne in 1958. Bud was working in the field during autumn harvest one year and became entangled in the combine; Lorraine saw her husband was in trouble and she rescued him! Lorraine and Bud operated the Champlain Café in Ortonville for one year.

Lorraine worked in various factories in the Ortonville area including: OrCon Industries and Morris Rod Weeder. She also held jobs as a bookkeeper and waitress. Lorraine was a member of Zion Lutheran Church in Ortonville.

In 1982, Lorraine was united in marriage with Robert Hines. Together, the couple spent 14 winters in Donna, TX.

Lorraine greatly enjoyed spending time with her friends and family; the coffee pot was always on and ready for company. She had a sense of humor and loved a good joke. When her children were young, Lorraine taught them to play ball and later taught them how to embroider when they were in grade school.