Shirley Bassett, age 91, of Wilmot, SD, passed away on Sunday, October 31, 2021, surrounded by her family at Wilmot Care Center in Wilmot,... 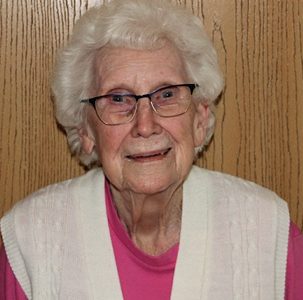 Shirley Bassett, age 91, of Wilmot, SD, passed away on Sunday, October 31, 2021, surrounded by her family at Wilmot Care Center in Wilmot, SD.

Funeral services will be held on Friday, November 5, 2021, at 2:00 p.m. at First Presbyterian Church in Wilmot. Visitation will be held on Thursday, November 4, 2021, from 5:00 p.m. to 7:00 p.m. at the church and will continue one hour prior to the service on Friday. Rev. Cheryl Rondeau-Bassett will officiate, and interment will take place at Wilmot City Cemetery.

The service will be livestreamed and recorded and will be available at the bottom of this page.

Shirley Irene (Hove) Bassett was born on March 9, 1930, to Herman and Iva (Kinsman) Hove in Peever, SD. The family lived in various places in Roberts County, SD, until returning to Peever in 1942. Shirley attended junior high and high school in Peever, graduating with the Class of 1948. After graduation, she attended Northern State Teacher’s College in Aberdeen, SD. Shirley taught in rural school in Roberts County for 10 years until 1958.

On June 14, 1952, Shirley was united in marriage with Donn Bassett at Peever Lutheran Church. Together, they were blessed with four children: Kurt, Rhonda, Scott, and Todd. Shirley joined First Presbyterian Church in Wilmot where she was a dedicated member. She was known for her letter writing and wrote many letters to her friends and family.