Evelyn Dittes, age 92 of Milbank, SD passed away on November 2, 2021, after suffering a devastating stroke at her home. Funeral services will... 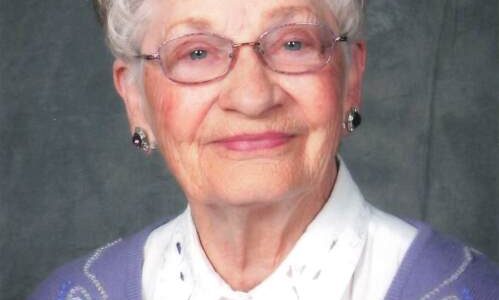 Evelyn Dittes, age 92 of Milbank, SD passed away on November 2, 2021, after suffering a devastating stroke at her home.

Funeral services will be held on Wednesday, November 10, 2021, at 11:00 a.m. at Living Word Lutheran Church. Rev. Kent Groethe will officiate, and burial will be in the Milbank City Cemetery. Visitation will be one hour prior to the service. Casket bearers will be: Dakota Juul, Tim Dittes, Doug Dittes, and Dan Dittes. The pianist will be Brenda Handel-Johnson.

Evelyn Mae (Bryngelson) Dittes was born on February 28, 1929, in Albee, SD. She was the daughter of Ralph and Julia (Scheie) Bryngelson. Evelyn grew up on a farm near Revillo, SD. She attended Milbank High School after moving to a farm south of Milbank.  She continued her education at Northern State Teacher’s College in Aberdeen, SD, earning her teaching certificate. After graduating, she taught rural school for one year before marrying Virgil Earl Dittes on December 20, 1948.

They moved to Deadwood, SD, and lived there for nine years and had two sons: Jonathan and Jim. They moved to South Pasadena, CA, in 1957, where they had a daughter, Marcia. They spent two years in Bakersfield, CA, before moving to Osseo, MN, in 1971, and lived there until Virgil’s retirement in 1991. Evelyn and Virgil did some traveling throughout the United States including a two-month trip to Alaska. Evelyn enjoyed wintering at Lost Dutchman RV Park in Apache Junction, AZ, where she stayed busy going to jams, craft shows, Bingo, dances, and “Red Hatters” activities. They returned to Milbank in 2007 so they could be closer to family. Evelyn enjoyed telling jokes, playing pranks, entertaining “old folks” with her dance partner (dummy) Homer, making and designing crafts, crocheting, quilting, attending church at Living Word Lutheran Church, and her weekly ritual of watching “Fun Time Polka.” She was a member of the American Legion Auxiliary.