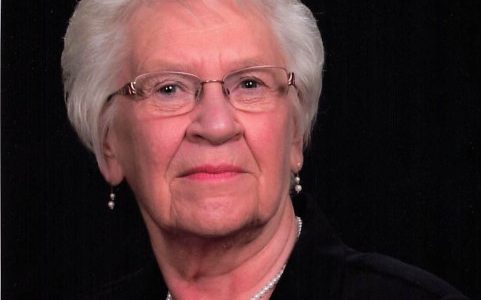 Funeral services are scheduled for Friday, December 3, 2021, at 10:00 a.m. at Central United Methodist Church in Milbank. Rev. Thom Bowsher and Pastor Kristy Liebe will officiate. Burial in the Forest Hill Cemetery in Canton, SD, at 3:00 p.m. Visitation will be held at the church on Friday, one hour prior to the service.

Dolores “Dolly” Ann Peterson was born on April 15, 1939, in Wilmot, MN, to John and Katheryn Meyer at the family farm. She attended grade school in Fulda, MN. She married Marlin Kasuske in 1956 in Reading, MN. In 1980 they divorced. Dolly worked for several years as a waitress at Trevett’s Cafe. On April 13, 1990, Dolores was united in marriage to Donald Peterson. Don and Dolly started Double “D” Designs, a collectable buckle and toy business. Their first major contract was with the State of South Dakota to design and distribute all of the buckles for the State Centennial. They went on to design Buckles for Centennials and special events for many towns in both the Dakotas and Canada. They enjoyed traveling to many shows and events to sell their goods and met many people along the way. They built two homes together and enjoyed hosting many events for family and friends, including the red-hats.

Dolly enjoyed needlework, especially embroidery. She enjoyed travel and enjoyed anywhere with hills and mountains. She enjoyed the many family gatherings at the “hide-away” at the lake and was famous for serving her party potatoes.