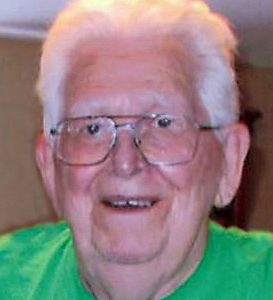 Mass of Christian Burial was on Saturday, December 18, at St. Lawrence Catholic Church in Milbank.

Donald Gene Mead was born on March 16, 1931, to Harold and Caroline (Duff) Mead in Parkersburg, Iowa. He graduated from high school in Clark, SD. Following graduation, he joined the United States Navy, serving from 1948 until his retirement in December 1967.  While in the US Navy his duty assignments included Virginia, Idaho, California (twice), South Dakota, Illinois, Massachusetts, and Hawaii. He served in both the Korean War and Vietnam War.

He was united in marriage to Mary “Eileen” Ingham on March 4, 1952 in Norfolk, VA and enjoyed many happy years of marriage until her death in 2006. After serving in the US Navy, he and Eileen moved to South Dakota where he attended Black Hills State College in Spearfish, SD, and graduated from the National College of Business in Rapid City, SD. While attending school he worked at both Trask Motors in Custer, SD, and at the Custer State Park Youth Forestry Camp as a counselor. In 1977 they moved to Milbank, SD, where he worked for the state of South Dakota as a Court Services Officer (probation officer) until his retirement in 1996. Don married Betty Gill in 2007.

Don was a member of St Lawrence Catholic Church in Milbank, SD. He was also a member of the Veterans of Foreign Wars, American Legion and the Knights of Columbus. In his earlier years Don enjoyed fishing and hunting.  He enjoyed square dancing and collecting eagle figurines.